CAA Act Protest: In Tamil Nadu, 'kolams' are drawn outside the Hindu homes early in the morning as an auspicious mark believed to bring prosperity. The 'kolam' is drawn with rice flour so that ants can consume it. 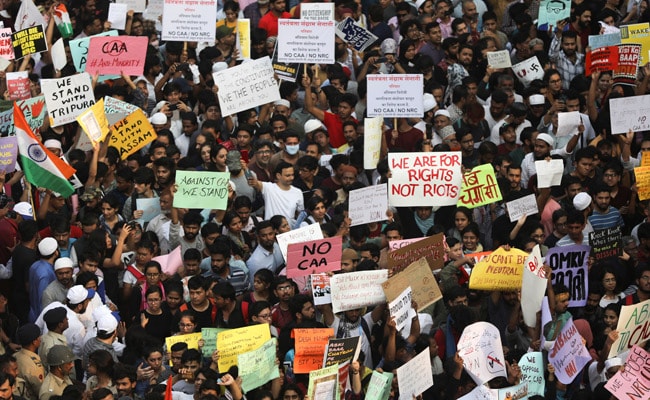 CAA protests: Massive protests have broken out nationwide over the citizenship law.

As anti-citizenship law protests across the country showed no signs of let up, "kolams" were drawn outside the homes of DMK President MK Stalin and his sister Rajya Sabha Member Kanimozhi and also outside the residence of their late father M Karunanidhi along with the slogan, "No CAA-NRC". In Tamil Nadu, 'kolams' are drawn outside the Hindu homes early in the morning as an auspicious mark believed to bring prosperity. The 'kolam' is drawn with rice flour so that ants can consume it.

The Uttar Pradesh Congress delegation will meet Governor Anandiben Patel in Lucknow today to submit a memorandum over law and order in the state and against the Citizenship Amendment Act.

Lashing out at the BJP government for trying to brand the protesters against the Citizenship Amendment Act as "anti-nationals", West Bengal Chief Minister Mamata Banerjee on Monday urged political parties and civil society groups to join hands and isolate BJP across the country. Mentioning that the BJP is trying to take away the citizenship of legal citizens of the country, Mamata Banerjee said she will not allow the updation of the National Population Register (NPR), which has already been stayed by her government.

Here are the Live updates on Citizenship Amendment Act protests:

Dec 30, 2019 13:18 (IST)
West Bengal CM Mamata Banerjee in Purulia during a rally against Citizenship Amendment Act said, "I would like to appeal to everyone, come together and isolate BJP."
Dec 30, 2019 12:58 (IST)
Too little compassion, coming too late: Sadhguru
Supporting the CAA and NRC, spiritual leader Sadhguru Jaggi Vasudev said that the move is 'too little compassion, coming too late'. "In my opinion, CAA is too little compassion, coming too late. The Bill is only focused on religious persecution. Looking at the reactions on the street, the vehemence with which people are fighting, I was wondering did I miss something. Am I not getting something here," ANI reported Sadhguru as saying.
Dec 30, 2019 12:48 (IST)
Spearheading a campaign in support of the Citizenship (Amendment) Act, PM Modi  posted a video of spiritual guru Sadhguru Jaggi Vasudev, in support of the law.

Do hear this lucid explanation of aspects relating to CAA and more by @SadhguruJV.

He provides historical context, brilliantly highlights our culture of brotherhood. He also calls out the misinformation by vested interest groups. #IndiaSupportsCAAhttps://t.co/97CW4EQZ7Z

Dec 30, 2019 12:47 (IST)
CRPF on Priyanka Gandhi's Security Breach
CRPF says no security breach during Priyanka Gandhi Vadra's trip to Lucknow where she rode pillion on scooter.
Dec 30, 2019 12:11 (IST)
JP Nadda to hold meet over Citizenship Amendment Act
The Bharatiya Janata Party (BJP) working president Jagat Prakash Nadda is scheduled to hold a meeting of party general secretaries later on Monday. The meeting will be held over different issues including the Citizenship (Amendment) Act (CAA) outreach program and party's organizational elections. On December 26, party sources said that senior cabinet ministers and BJP leaders would be deployed across the country in an effort to dispel misgivings about the Citizenship (Amendment) Act, 2019, and National Register of Citizens (NRC) being allegedly spread by the opposition.
Dec 30, 2019 11:14 (IST)
Amid the ruling BJP's outreach effort across the country to "spread awareness" about the controversial amended citizenship act, Prime Minister Narendra Modi today sought support for the law as he tweeted a hashtag- #IndiaSupportsCAA - reasserting that it won't take "anyone's citizenship away".

#IndiaSupportsCAA because CAA is about giving citizenship to persecuted refugees & not about taking anyone's citizenship away.

Check out this hashtag in Your Voice section of Volunteer module on NaMo App for content, graphics, videos & more. Share & show your support for CAA..

Dec 30, 2019 11:04 (IST)
"Nitish Kumar Can Tell": Prashant Kishor on JDU's Citizenship law stand
Janata Dal (United) vice-president and political strategist Prashant Kishor has said it is only Bihar Chief Minister Nitish Kumar who can tell under what circumstances they supported the Citizenship (Amendment) Bill in parliament earlier this month. JDU president Nitish Kumar is yet to clear his stand on the National Register of Citizens (NRC) issue, but his second-in command has expressed displeasure after his party supported its ally BJP on the bill and got it passed in the Lok Sabha and the Rajya Sabha. Mr Kishor also met Nitish Kumar on the issue. Reports have said Mr Kishor even offered to resign, but his resignation was rejected.
Dec 30, 2019 11:02 (IST)
Nobody Needs to Prove Link Between NPR, NRC: Prashant Kishor
"Nobody needs to prove the link between NPA and NRC. The documents speak for themselves and they state that NPR is the first step for NRC. This is not a matter of an individual. It was stated by the President in his address. This entire NRC and NPR debate are linked to the Citizenship (Amendment) Bill of 2003, during which, for the first time it was defined that after NPR, if the government wishes, they can do NRC," Mr Kishor.
Dec 30, 2019 11:01 (IST)
Prashant Kishor Questions Sonia Gandhi's Silence on NRC
Political strategist and Janata Dal (United) leader Prashant Kishor has questioned Congress president Sonia Gandhi's "silence" over the National Register of Citizens (NRC).