Cities Should Get a Chance to Plan Their Growth: PM Modi 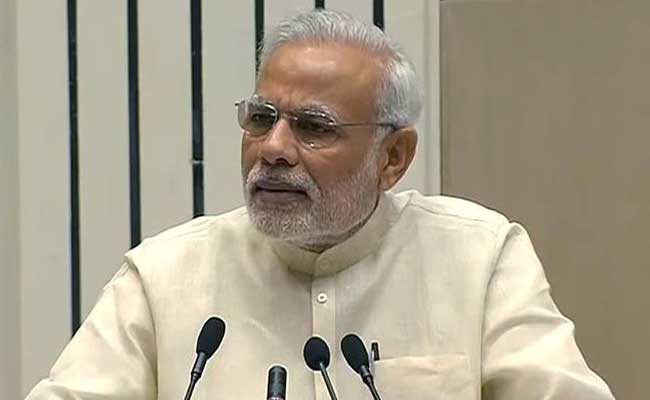 New Delhi: Prime Minister Narendra Modi today said private property developers should not decide how a city should grow and the decision should be taken by residents and the city leadership, as he unveiled three mega flagship urban schemes aimed at developing cities as engines of growth.

Urbanisation should be viewed as an opportunity and urban centres should be viewed as growth engines, he said launching the Atal Mission for Rejuvenation and Urban Transformation (AMRUT), Smart Cities Mission, and Housing for All (Urban) in New Delhi.

"Under these schemes we can go ahead and we can do it together (Centre and state). India is rapidly urbanising.

Every year Hindustan gives birth to a small country," he said.

While 500 cities will be developed under AMRUT scheme, there would be 100 Smart Cities over five years and Housing for All aims construction of 2 crore houses in urban areas in the next seven years.

Smart City will be selected through a competition among cities while 500 cities are being identified under AMRUT.

Referring to Smart City, PM Modi said, "For the first time in India, a challenge was being floated, in which the citizens of urban India could contribute in the formulation of development visions of their cities."

Those cities which were able to competitively meet the required parameters would be developed as smart cities.

"This competitive mechanism would end the top-down approach, and lead to people-centric urban development," he said.

"These urban development schemes were not prepared by the Government alone, but involved perhaps the biggest consultation exercise ever taken by the Union Government, involving all stakeholders and examining global best practices," he said.

Stressing that all schemes for urban development should move forward based on people's participation, PM Modi said, "There is a lack of holistic vision about urban planning, and expansion is driven not by the administrators of a city, but by property developers.

"Through AMRUT, the aim of the Government is to give cities themselves the chance to plan their future growth," he said.

The Prime Minister said the people assembled for the function in New Delhi had on them the collective responsibility for better quality of life for 40 percent of India's population that either lived in cities, or were dependent on cities for their livelihood.

The Prime Minister stressed that aspirations of migrants from rural areas, and slum dwellers, should be balanced with the changing global environment and said ensuring a good life for them is the government's responsibility.

Giving a simple vision of a smart city, he said it is one which was a step or two ahead of people's aspirations.

"There should be facility for walk-to-work because today a person spends maximum time in travelling to office and gets very little time to work," PM Modi said.

Besides transportation, technology also plays a key role and there should also be provision for energy efficiency, and cycling etc.

Lamenting the state of affairs in urban areas, he said, "If this had been done 25-30 years ago, it would have led to good results today, but better late than never. Schemes which had a clear vision and were people-centric, were the need of the hour."

Chhattisgarh, which is fighting Maoist menace, is making an all out effort to make the state free from open defecation, he said.

Mentioning the challenge of rising population, he said all possible avenues should be explored to find the resources for urban development.

Highlighting the importance of the housing scheme, the Prime Minister observed that, "A house was a turning point in the lives of poor, which leads towards a better life and the government's effort was to not just provide a house, but to provide the right environment to live life to the fullest."

Citing the existing housing shortage of 2 crore units, he said India would complete 75 years of Independence in 2022, and by then, it was "our responsibility to provide a house for everyone".

Noting that public representatives and leaders are remembered by the good work they did in their terms, the Prime Minister asked urban leaders to contribute to doing something for the good of the people.

If a person gets an opportunity and does something worthwhile, it will be remembered even after 50 years, he said.

Asking chairpersons of municipalities and mayors of urban local bodies to do some good work in their terms, PM Modi said, "You can show your grandson whether it is any building or whatever you have done 50 years ago. The success parameter of life is that what you have done for the people."

The Prime Minister appreciated people for their interest and work in the Swachh Bharat initiative, as well as the positive role played by media in generating awareness.

"All media men are doing it on their own and media role in Swachh Bharat campaign will always be remembered for this, he said.

On the rural and urban divide, the Prime Minister said urban and rural development in the country should be complimentary.

"One way of doing this was to ensure waste water management in urban areas, so that the treated water could be returned to rural areas for irrigation. Similarly solid waste management could generate compost which could act as organic fertiliser for the surrounding rural areas," he said.

The Prime Minister also visited an exhibition on best practices in urban development.