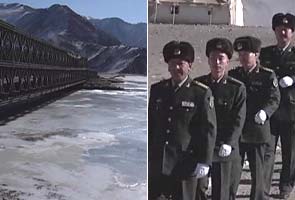 Leh/Srinagar: After remaining peaceful for most of the year, Chinese troops entered Indian territory in the fag end of 2010 along the Line of Actual Control in South-eastern Ladakh region and threatened a contractor and his team to halt work on constructing a "passenger shed".

The Chinese troops, which included motor-cycle borne personnel of People's Liberation Army (PLA), entered Gombir area in Demchok region in Jammu and Kashmir and threatened the civilian workers who were building the shed, the plan for which was cleared by the state rural development department, according to details accessed by PTI.

The incident took place in September-October last year in a village about 300-kms south-east of Leh district headquarters.

An official report, which was prepared after a meeting of officials from civilian administration, army, central security agencies and Indo-Tibetan Border Police, stated that a passenger shed was approved at an estimated cost of Rs two lakh to be built at 'T' point in village Gombir under the Border Area Development Project of Ministry of Home Affairs.

The Chinese army -- PLA -- came to the 'T' point and asked the contractor to stop the work, the report said. An official, speaking on the condition of anonymity, said the arrival of Chinese troops, some of whom were ironically on motorcycle, triggered panic among the workers who rushed to the nearby Army post for help.

The Chinese troops also shouted some slogans which could not be translated by the officials, the official said.

The Army was quick in responding and asked the state government to maintain status quo, the report said and added that the 3 Infantry Division asked the state Government to take the permission of Ministry of Defence before carrying out any construction activities at least 50 kilometres of the Line of Actual Control.

When contacted, Lt Col J S Brar, who officiates as spokesperson for Leh-based 14 Corps, refused to comment on the issue.

According to the report, the civil administration proceeded on field verification to the area on October two, 2010 and on the next day, Army wrote to the administration to seek Defence Ministry's clearance for any project within 50
kms of Border.

The Civil administration said it was baffled by the Army's missive as this would mean entire Nyoma sub-division would get affected in the matter of developmental work.

The state Government had planned construction of seven link-roads in Nyoma and Damchok areas to increase connectivity and provide job opportunity to the people of this remote and treacherous mountain region, which is close to the Line of
Actual Control.

The Chinese troops, which had carried out incursions into Indian territory in June and July 2009, had also carried out such an exercise in November 2009 also when its troops threatened Indian workers to stop road construction in Ladakh.

The road construction was taking place in the Demchok sector which was stopped after the Defence Ministry had raised objections with the then Deputy Commissioner (Leh) A K Sahu and asked them to stop the work.

The work on a link-road in Demchok in South-eastern Ladakh region was stopped last month after objections were raised by the Chinese Army. Work on the road, which was to connect two villages - the last inhabited areas on the Line of Actual Control (LAC) on Sino-Indian border in Demchok - was stopped during the last week of October 2009.

The road was being built under the Centrally-sponsored National Rural Employment Guarantee Scheme (NREGS).

In 2009, the Chinese Army had violated the International Border in Ladakh region and painted boulders and rocks in the area red.

The Chinese troops had entered nearly 1.5 kilometres into the Indian territory on July 31 near Mount Gya, recognised as International border by India and China, and painted the boulders and rocks with "China" and "Chin9" in red spray paint.

The 22,420 ft Mount Gya, also known as "fair princess of snow" by Army, is located at the tri-junction of Ladakh in Jammu and Kashmir, Spiti in Himachal Pradesh, and Tibet. Its boundary was marked during the British era and regarded as
International border by the two countries.

Before this, Chinese helicopters had violated the Indian air space on June 21 along the Line of Actual Control in Chumar region and also helli-dropped some expired food.

Ironically, Chinese army has done construction activities along the international border across Karakoram ranges in Ladakh sector for the first time in 2009 after the 1962 stand-off between the two countries and a report of Jammu and Kashmir government had claimed that Chinese have been taking "land in inches and not in yards".

"They (Chinese) have threatened the nomadic people who had been using Dokbug area (in Ladakh sector) area for grazing since decades long, in a way to snatch our land in inches. A Chinese proverb is famous in the world 'better do in inches than in yards," the report filed by a former Sub Divisional Magistrate (Nyoma) Tsering Norboo had said.

Norboo had been deputed by the state government to probe incursion of Chinese Army in Dokbug area and threatening the local shepherds to leave the land as it belonged to them.

The area has been used by the shepherds to graze their livestock as the area is warmer compared to other parts of Ladakh.

India and China have been engaged in talks over the Line of Actual Control and had exchanged maps in 2002.

In the western sector (East Jammu and Kashmir), the Samar Lungpa area, between the Karakoram Pass and the Chipchap river, is contentious, with Chinese maps showing the LAC to be south of the Samar Lungpa.

This is the northernmost part of the border, far to the north of Leh. But while the Indo-Tibetan Border Police operates north of the line the Chinese claim to be the border, they remain south of the Lungpa. South of the Chipchap River are the Trig Heights, comprising Points 5495 and 5459.

Chinese troops frequently enter the area and in fact, they have a name for Point 5459; Manshen Hill. The area, south-east of Trig Heights, called Depsang Ridge is also contentious.

Differences were found when Chinese small-scale maps were interposed on large-scaled Indian ones.
Comments
China troopsChinese incursionChina incursion in Ladakh