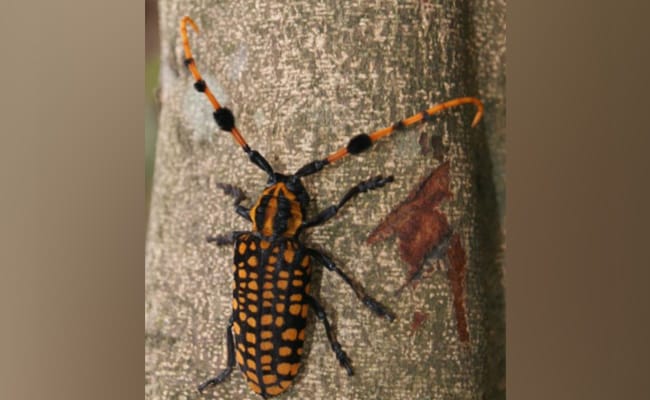 The China beetle infestation is rapid and fast spreading with not just litchi trees - its favourite - but now aonla plants falling prey too, a research by scientists in Arunachal Pradesh has found.

A recent study published in the Indian Journal of Entomology by Dr MM Kumawat along with his colleagues in the College of Horticulture and Forestry and Central Agricultural University, Pasighat, Arunachal Pradesh, has revealed the China beetle (aristobia reticulator) or Chinese stem borer beetle has been recorded on Indian gooseberry or aonla trees in East Siang district of Arunachal Pradesh.

"The occurrence of China beetle on aonla trees in different parts of Arunachal Pradesh was observed with varying levels of infestations. The beetles were found feeding on the bark of tender twigs causing girdling from June to August," the report said.

It speculated that the transition to aonla trees makes the pest - first discovered in India in 1997 in guava trees of Meghalaya and then found feeding on litchi trees in Arunachal Pradesh's Pasighat by Dr Kumawat and his team in 2015 - is dangerous as it may now spread to other regions growing aonla.

"This China beetle may spread to major litchi and aonla growing states like Bihar, West Bengal, Uttar Pradesh and Jharkhand, if quarantine measures are not taken. Considering the coming threat, studies were conducted on incidence and bionomics of this beetle on aonla and other plantations at CHF, Pasighat," Dr Wangchu, another researcher in CHF, Rajasthan said in a statement.

The study was carried out in 287 trees between 4 and 15 years old in 15 orchards near Pasighat, of which 58.9 per cent trees were damaged by larva of the China beetle. Older trees were severely affected, as numerous larvae were reported on single tree which severely harm the trees.

The shoots or branches of 36.1 per cent of those infested trees had died due to heavy tunnelling by grubs in xylem tissues. "Maximum incidence of China beetle observed in the weakened trees and leads to decline of orchards. Most of the beetles preferred to lay eggs on earlier injured plants and more than one larva was found on a single husk. Beetles preferred to lay eggs on litchi, followed by aonla, whereas guava was the least preferred host for egg laying," the report said.

This beetle is a regular pest of litchi and longan trees in China and Myanmar and according to Dr Wangchu, have spread to north-eastern region of India that is in close proximity to China and Myanmar. The border areas are occupied with dense forest, enabling the pest to invade the region.