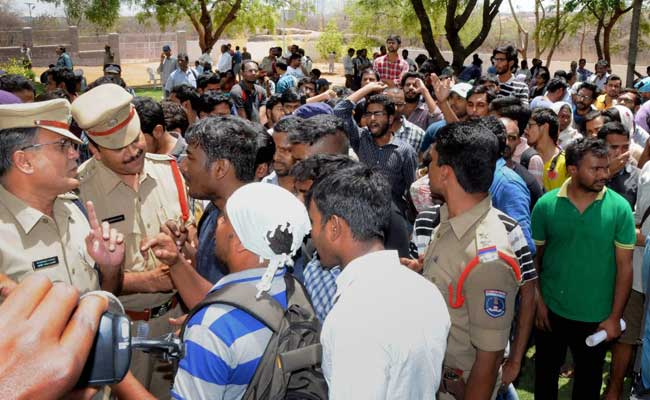 Police had arrested around 30 students from Hyderabad university after Tuesday's protests.

He was responding to a debate in the assembly on the unrest in the central university in the wake of Mr Rao resuming charge as the vice chancellor.

KCR, as the leader is popularly known, said he would take up the issue with PM Modi in two to three days and expressed the hope that the issue will be sorted out.

He was responding to the demand by some parties that the House pass a resolution to urge the central government to recall Appa Rao as Vice Chancellor as his return to the university has created fresh unrest.

Stating that the university is a central institution institution and does not fall under the purview of the state government, he rejected the demand for passing a resolution.

The chief minister also announced that a probe by a senior official will be conducted into the incidents that occurred on the campus on March 22.

"If any atrocities were found to be committed by police, appropriate will be taken," he said.

Alleging that police committed atrocities on students, the opposition Congress and MIM wanted a thorough probe.

On Tuesday, more than 100 students allegedly held the Vice Chancellor hostage in his office for six hours; some of them damaged property. It was the Vice Chancellor's first day back at work after he proceeded on leave amid angry protests over the death of PhD student Rohith Vemula.

The students say the Vice Chancellor must be held accountable for Mr Vemula's death and sacked. Police had arrested around 30 students from the university after Tuesday's protests.