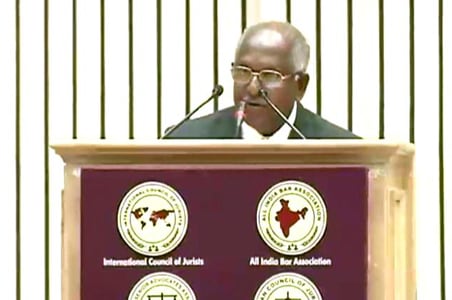 New Delhi: Rejecting Law Commission's recommendation for setting up of four Supreme Court regional benches, Chief Justice of India K G Balakrishnan on Saturday said he did not favour the "disintegration" of the apex court.

The CJI said, "It is a final court and we should maintain the integrity of the Supreme Court."

The Law Commission had last year suggested division of the Supreme Court into a Constitution bench at Delhi and regional benches in Delhi, Chennai, Kolkata and Mumbai.

The CJI said that there is nothing wrong in restructuring of the Supreme Court but it cannot be disintegrated.

Speaking at the R K Jain memorial foundation lecture here, he said that the filing of cases in the apex court is increasing at a phenomenal rate. There are at present over 50,000 cases pending in the apex court.

At present there are 26 judges in the Supreme Court against the sanctioned strength of 31.

Promoted
Listen to the latest songs, only on JioSaavn.com
The Law Ministry had sought opinion of Attorney General G E Vahanvati who also was not in favor of regional benches of the apex court.