Chandrababu Naidu, the Andhra Pradesh chief minister, met his Delhi counterpart at the latter's official residence and discussed a host of issues. 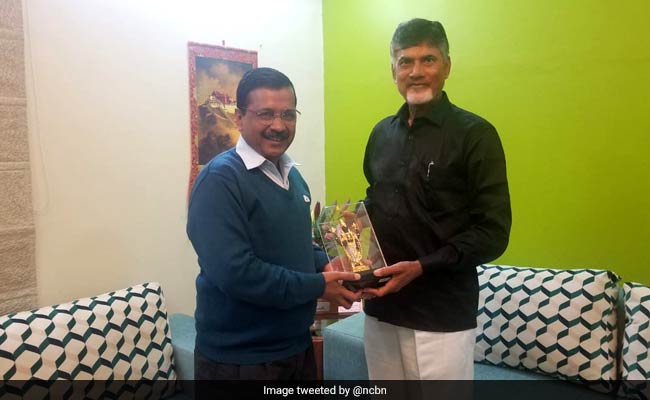 Mr Naidu, the Andhra Pradesh chief minister, met his Delhi counterpart at the latter's official residence and discussed a host of issues.

"It was great meeting @ncbn ji today. We will all fight together against Modi government," Mr Kejriwal tweeted.

He shared a picture of him and Mr Naidu that the Andhra chief minister had tweeted.

Earlier in the day, Mr Naidu had met opposition leaders, including Congress president Rahul Gandhi, in an attempt to bring together opposition parties on a platform to take on BJP in the polls.

Mr Naidu said there is a "democratic compulsion" for all the opposition parties to come together. However, the political compulsion of each party at the state-level will be taken into account while forming a united force to fight the saffron party in the Lok Sabha polls, he said.

His statement assumes significance in view of speculation over the possibility of an alliance between the AAP and the Congress which is yet to materialise even as both sides are attacking one another and asserting that they are going solo for Lok Sabha polls in Delhi.

Sources claimed backroom parleys between the two parties were still on over a "seat sharing" formula for Delhi where seven Lok Sabha seats are at stake.