Drinking water, food and shelter have been arranged for people who were displaced due to the cloud burst on Tuesday, the District Magistrate said. 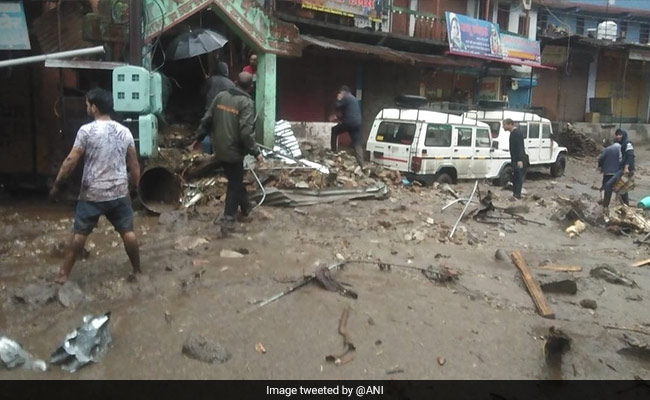 At least 25 shops and 31 houses are buried under the debris following the cloud burst incident in Uttarakhand's Chamoli, said District Magistrate Swati S Bhadoria on Wednesday.

Taking to the media, Ms Bhadoria informed that drinking water, food and shelter have been arranged for people who were displaced due to the cloud burst on Tuesday.

"State Disaster Response Fund (SDRF) is mobilising relief work. 25 shops, 31 houses are buried under debris. At least 3 JCB machines are deployed to clean the debris. Restoration of power supply is in progress. Four water tankers have been arranged for drinking water. Arrangements have been made in a private school for food and shelter of those who were displaced," she said.

In view of rising COVID-19 cases, Ms Bhadoria has issued orders imposing a "corona curfew" in Chamoli till May 9.

"During the curfew, essential shops will stay open in the district till 2 pm while pharmacies will remain open throughout the day," she informed.

Earlier in the day, Mukesh Repaswal, Additional Deputy Commissioner informed that the situation is under control now following the cloud burst in the district.

He said three Decentralised Treatment and Reuse (DTRs) and three water supply schemes have been affected and a report of damages to agriculture and horticulture is being evaluated.

However, he added that no loss to life was reported due to the incident.

Earlier, District Magistrate Swati Bhadoria had informed that the ongoing NTPC (National Thermal Power Corporation) projects in the Tapovan area of Uttarakhand have been halted due to a rise in the water level of the Rishiganga river.