Centre To Give 2,000 More Paramilitary Personnel To Punjab: Bhagwant Mann

Bhagwant Mann met Union Home Minister Amit Shah, who assured him of all assistance from the central government. 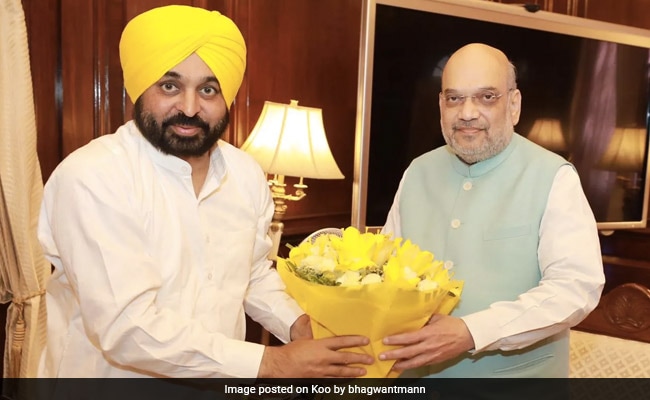 About 2,000 additional paramilitary personnel will be deployed in Punjab to enhance security as there have been regular inputs that some elements are trying to create unrest in the state, Punjab Chief Minister Bhagwant Mann said on Wednesday.

Bhagwant Mann said this after a meeting here with Union Home Minister Amit Shah, who assured him of all assistance from the central government.

"There have been regular inputs that some miscreants are trying to create trouble in Punjab. So I have request the home minister to sanction additional forces for the security of the state," he told reporters.

The chief minister said 10 companies of paramilitary personnel have already reached Punjab while another 10 companies will be approved by the Union Home Ministry soon.

One company of paramilitary comprises about 100 personnel.

Bhagwant Mann said the home minister told him that there is no compromise on the national security and it is above party politics and the central government would provide all help necessary to the Punjab government.

The chief minister said he has conveyed to the home minister about the supply of arms from across the border through drones and sought the central government's assistance to tackle it. Mann said that security at borders have to be intensified for defending our country's security and sovereignty.

He expressed deep concern over the increasing drug and weapon smuggling from across the border through drone and impressed upon Shah to immediately provide anti-drone technology to state for foiling such attempts.

The Punjab chief minister also impressed upon Shah to issue notification for the purchase of Basmati on MSP saying it is need of the hour to bring the farmers out of wheat-paddy cycle for which promotion of Basmati is must. Mann said that it will help in saving the precious resource in form of water in the state and will give a boost to crop diversification.

The chief minister also sought compensation of Rs 500 per quintal for low yield of wheat grain in the state.

He said that due to intense heat during this summer season the wheat grains in Punjab have been damaged adding that it is the high time that farmers must be compensated for this damage by giving a compensation worth Rs 500 per quintal for low yield to them.

Bhagwant Mann said that hard working and resilient farmers of state have made enormous contribution in making our country self reliant in food production and now Union government must bail them out in this hour of crisis.

Raising another issue, he asked Amit Shah to repeal the order pertaining to abolishing the member of Punjab from the BBMB. He said that this is a discriminatory step which has bruised the psyche of every Punjabi. Mann said that the Union government must roll back this "retrogressive step which dilutes the federal structure in the state".

Mann assured Shah that Punjab will uphold the ethos of communal harmony, peace and brotherhood in state. He said that every attempt to divide state in communal lines will be foiled and hard earned peace of state will be maintained at every cost. Mann said that Punjab has always remain sword arm of the country and the state will continue to uphold this glorious tradition.

Sources said the security agencies have been put on alert and security has been enhanced in Amritsar ahead of the 38th anniversary of the Operation Blue Star.

The operation Blue Star was carried out by the Army to flush out terrorists hiding at Golden Temple complex between June 1 and 8, 1984.