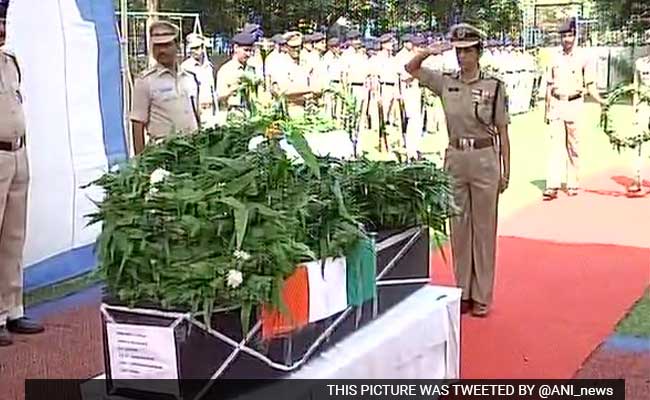 CRPF officials pay tribute to constable Laju NS who lost his life in an encounter with Maoists in Chattisgarh's Sukma district.

New Delhi: The CRPF, the paramilitary force, today bid farewell to one of its martyred commandos who was killed in a Maoist encounter in Chhattisgarh's Sukma district.

A resident of Kerala's Thiruvananthapuram, Mr Laju, was killed when his patrol team came under heavy attack from Maoists on March 3 in the south Bastar's Dabbamarka.

Mr Laju was a constable rank trooper in the 208th CoBRA (Commando Battalion for Resolute Action), a specially raised jungle warfare combat unit of the CRPF, deployed in Chhattisgah for anti-Maoist operations.

After paying tributes and solemn sounding of the bugle at a forces' camp, his body was flown to Kerala, a senior official said.

The operation that began on March 1 in the jungles of Sukma was led by CoBRA and also had men from Chhattisgarh Police's District Reserve Group (DRG). In the encounter, three commandos were killed, while 15 others were injured including team commander PS Yadav.

The official said the bodies of two other CoBRA commandos, Fatte Singh and Laxman Purty, have also been sent to their home states of Madhya Pradesh and Jharkhand respectively. After a heavy exchange of fire on March 2, the teams engaged in the operation came back to the nearest base at Kistaram police station in Sukma last morning with the help of reinforcements and air support by helicopters.