The 2021 census would begin from all hilly areas in which Jammu and Kashmir is on the top followed by Uttarakhand and Himachal Pradesh. 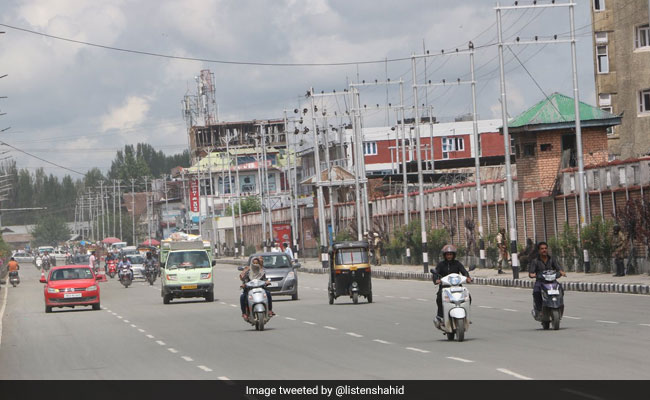 Jammu and Kashmir people would be registered in the digital NPR data under the census 2021. (File)

The Centre is ready with a list of states and Union Territories for the first digital National Population Register (NPR) under census 2021 putting newly created Union Territory Jammu and Kashmir on top where the mammoth exercise would start in September 2020.

Registrar General and Census Commissioner of India -- founded in 1961 by Ministry of Home Affairs for arranging, conducting and analysing the results of the demographic surveys of India, including census and linguistic survey - has put Jammu and Kashmir on the top of the list as it is a hilly area.

The 2021 census would begin from all hilly areas in which Jammu and Kashmir is on the top followed by Uttarakhand and Himachal Pradesh, a Census India 2021 helpline operator told IANS.

Uttarakhand and Himachal Pradesh would be covered in the second phase of the exercise, said the operator, who was contacted at 18001802021 toll free number.

In the telephonic conversation, the female operator, whose name is withheld, said the population-based census 2021 exercise would be held in Jammu and Kashmir from September 11, 2020 to September 30, 2020.

Jammu and Kashmir people would be registered in the digital NPR data under the census 2021 within the 20-day exercise.

The census 2021 would take place in Uttarakhand and Himachal between October 1, 2020 and October 5, 2020, said the operator, adding other states and Union Territories would be covered under the exercise between February 9, 2021 and February 28, 2021.

The population-based census would also be held in Delhi between February 9, 2021 and February 28, 2021, she added.

According to the office of the Registrar General and Census Commissioner of India, the census 2021 will be done on different survey grounds such as NPR, Household, House Listing and Linguistic, and that all will be done through a mobile-based App 'Census 2021-NPR', which can be downloaded from Google Play Store.

An officer linked to Registrar General and Census Commissioner of India told IANS that the Census 2021-NPR App would be of 1.6 version and it is not for common people's use. "The App can only be used by the government enumerators who will be employed in taking census of the population."

Explaining about the functioning of the app, the officer said the enumerators would be deployed on block levels and they would function under a supervisor. "There would be around six enumerators under each supervisor."

Each enumerator will have an android mobile phone with 4.5 version as it is mandatory to have a compatible handset while doing the digital NPR under the census 2021 this time, he said.

Noting that the digital move will help in checking wastage of paper and save time being spent on the census.

The Registrar General and Census Commissioner of India on Monday also said that the census 2021 data will be released in much shorter span than 2011 census, when it took seven years for data to be made public, only because of digital initiation being adopted in the exercise - the 16th Indian Census and 8th after Independence.

The 2021 census would conclude on March 1 midnight and a revisional round would be conducted between March 1, 2021 and March 5, 2021 to include them who left from the exercise, said the officer.

The NPR, a register of usual residents, will be prepared under the Citizenship Act 1955 and the Citizenship (Registration of Citizens and issue of National Identity Cards) Rules, 2003.

A digital NPR will help in solving several issues, such as law and order and gender equality, said the officer.