The comments come a day after government ordered a five-fold increase in printing of Rs 500 notes. 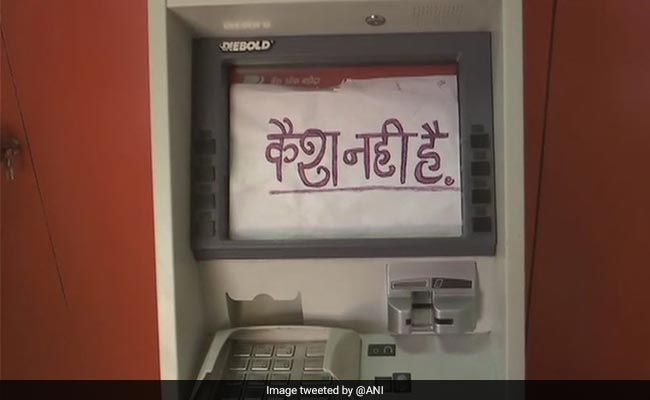 Cash Crunch: ATMs across several states are either not operating or out of cash

Nashik, Maharashtra: Non-availability of ink has resulted in a halt in printing of Rs 200 and Rs 500 denomination banknotes at the Currency Note Press in Nashik, an employees' union leader claimed today.

"The ink used to print the notes is imported, which is not available now, leading to a halt in printing of these Rs 200 and Rs 500 banknotes," Jagdish Godse, the president of press workers federation told reporters here.

He said this can be one of the reasons why there is a shortage of notes at the national level, stating that the press in Nashik Road area is one of the leading ones engaged in printing all the denominations, except the Rs 2,000 bills.

However, he did not specify when the printing of notes stopped.

Usually, the Reserve Bank gives an order for printing after which the CNP, a unit of Security Printing and Minting Corporation of India, starts printing, he said, adding the government-run mint is awaiting central bank's orders to start printing.

The company falls under the finance ministry, which takes care of its daily functioning, and not the Reserve Bank, he said.

The comments come a day after government ordered a five-fold increase in printing of Rs 500 notes to supply up to Rs 75,000 crore worth of new notes next month.

ATMs in some parts of the country continued to remain dry today as government scrambled to rush currency to meet an "unusual spurt in demand" which according to it are due to abnormal season demand.

ATMs across UP, Bihar, Andhra, Telangana, MP, Chhattisgarh and the poll-bound Karnataka are either not operating or out of cash, reminiscent of post-demonetisation scenes. Some ATMs in Delhi too are reportedly out of service.

Meanwhile, sources in the CNP also said printing of the Rs 10 denomination notes has also stopped as the centre is yet to give a go-ahead for a revised design of the note.

Promoted
Listen to the latest songs, only on JioSaavn.com
The press is printing currency notes of Rs 20, Rs 50 and Rs 100 denominations as a result of this, they said, adding work is happening in three shifts.

Much to the chagrin of the workers at the CNP, an ATM run by a top nationalised bank inside the campus has also gone dry since the past few days, Mr Godse said.

Cash crunchatms out of cash