Case Against Kanchi Seer Was For Political Reasons: Amit Shah 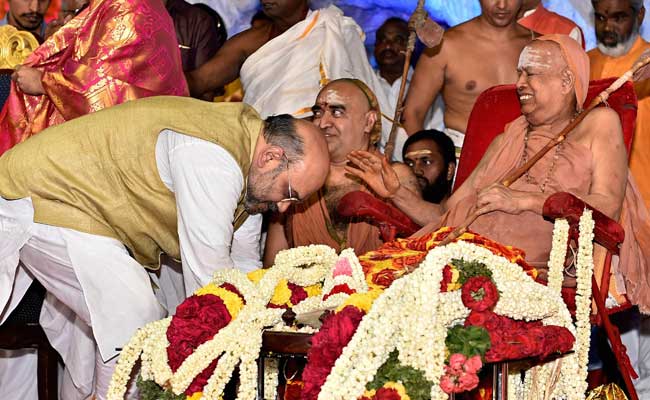 Chennai: BJP President Amit Shah today said there was no truth in the charge against the Kanchi seer Jayendra Saraswathi in the Sankararaman murder case and asserted that it was filed against him for political reasons.

"Years ago, for political intentions, a hurdle happened in the form of legal action over the Kanchi Mutt," he said in Chennai hailing Jayendra Saraswathi for his services to the people.

"But the truth cannot be hidden always. For political reasons, big action was taken against the Kanchi mutt on legal basis. However, everyone knew there was no truth in it and the case was filed based on political reasons," he said.

Participating in the 'Sahasra Chandra Darshan' felicitation for the Kanchi seer, who had completed 80 years last year, the BJP chief said "people across the country opposed it and took up cudgels against the action".

He recalled that he sat in a protest demonstration opposing the action against the acharya. In 2013, Jayendra Saraswathi, junior pontiff Vijayendra Saraswathi and 22 others were acquitted by a Puducherry Sessions Court in the 2004 Sankararaman murder case.

After the September 2004 murder of Sankararaman, manager of a temple, Jayendra Saraswathi was arrested followed by his junior.

Praising the acharya for being easily accessible, Shah said he is a spiritual guide for the people. He lauded the services of Kanchi Mutt to the people and Sanathan Dharma.

"Be it east, west, south or west of the country, for all the people, Kanchi Mutt is the guiding centre," he said. Stating that it was a blessing to be able to participate in the event, he said the acharya has travelled the length and breadth of Gujarat.

"When a big clash was looming large between two communities, he held talks and restored normalcy in Gujarat," said Mr Shah.

Also, when Narendra Modi was Chief Minister of Gujarat, the acharya was honoured for his services to society, he said. "My prayer to the almighty is that he should guide society and the Mutt should continue to guide the Sanathan Dharma," he said.