Case Against 350 Farmers Over Violence During Protests In Haryana

The police had used tear gas shells and force to disperse a group of farmers who tried to march towards the venue where Chief Minister Manohar Lal Khattar was inaugurating a Covid hospital. 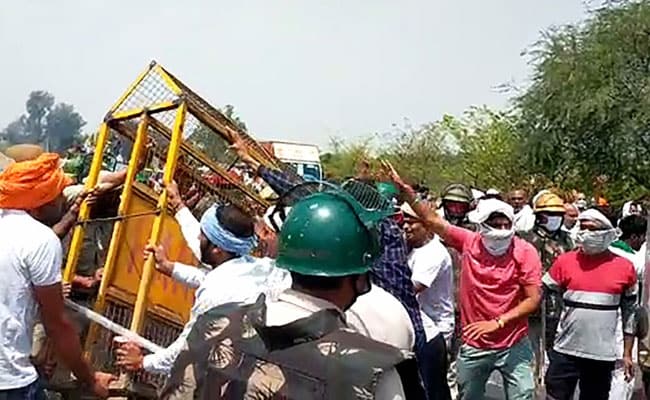 20 cops were injured in the clash between the farmers and the police last week. (File)

The Haryana police have registered a case against 350 unnamed farmers for allegedly attacking government employees and stone pelting during the protest against Chief Minister Manohar Lal Khattar who had inaugurated a Covid hospital last week.

The case has been registered on the complaint of Inspector Virendra Kumar, in-charge of Urban Estate Police Station, the police said on Thursday.

The case has been registered under sections 147 (rioting), 148 (rioting, armed with a deadly weapon), 188 (obstructing public servant in discharge of his public functions), 307 (attempt to murder), 353 (assault or use of criminal force to deter a public servant from discharge of his duty) of the Indian Penal Code, a district police spokesperson said.

Twenty policemen, including five women officials, were injured in the clash between the farmers and the police on Sunday, officials said. The police had lobbed tear gas shells and used force to disperse a group of farmers who tried to march towards the venue where Mr Khattar had gone to inaugurate the COVID-19 hospital on May 16.

Scores of farmers have been protesting against the Centre's new farm laws since last November and opposing public functions of BJP-JJP leaders in the state.

The Samyukta Kisan Morcha (SKM), an umbrella body of farmers'' unions spearheading the stir against the farm laws, in a statement had condemned the alleged assault on the protesters.

The police on Thursday clarified that tear gas was used first and then mild force was applied at the magistrate's order to protect the hospital from sabotage and to maintain law and order.

They also maintained that although a meeting was held between the farmer leaders and police after the incident on Sunday evening, the IG Police (Hisar Range) did not give any assurance that no FIR would be registered against the protesters, as was being claimed by some farmer leaders.

The police said when the protesters had started gathering on Sunday, the district police chief repeatedly informed them that the CM had already left the venue after inaugurating the COVID hospital.

However, the protesters did not pay heed and carried on with the agitation.

The police added that though some senior farmer leaders made efforts to stop some of the young protesters who had turned aggressive, they did not listen to the leaders.

"The agitators indulged in vandalism and blockade near the Jindal bridge and rammed barricades when the DSP and other police force reached the entrance of the newly-constructed Chaudhary Devi Lal Sanjeevani Hospital.

"They also tried to injure police officers by hitting them with vehicles and tractors several times. Heavy stones were also thrown at the police," a police spokesperson said.

Meanwhile, Haryana Congress leader and Adampur MLA Kuldeep Bishnoi condemned the registration of case against the farmers and sought a judicial inquiry into the entire incident.