Captured, Tortured By Pak And Still An IAF Pilot: A Kargil Hero's Story

Group Captain K Nachiketa with his parents, a day after returning to India following his release

New Delhi: "How badly did they torture you?" I asked Group Captain K Nachiketa. He kept silent for a moment, looked down and then at me straight in the eye. "The torture was quite bad. There comes a point where you think 'death is simpler,' but fortunately for me, the third degree part, which is the last part, didn't start for me." His voice shook a little.

During the Kargil War in 1999, K Nachiketa was a 26-year-old fighter pilot assigned the task of hitting Pakistani posts in Kargil at altitudes in excess of 17,000 feet. He had locked on to a target and fired the powerful cannon of his MiG 27 fighter bomber when he experienced a nightmare for a pilot anywhere. His engine "flamed out" - it went dead. Mid-air. Training took over: "get the engine restarted" was his only goal.

For a moment, there appeared to be some potential - the Tumanskii turbo jet engine on his MiG-27 started up in what pilots call a "re-light." But the hope of successfully flying out of the war zone evaporated almost as soon as it had emerged. The engine hadn't spooled up to maximum power soon enough, and the mountain terrain was coming up awfully fast. He wouldn't be able to pull up fast enough to steer clear of danger. "So my re-light did start but somewhere in the middle, I had to eject because I was getting too close to the terrain. And that is when I ejected."

"Sometime, during the ejection, you get into a grey out kind of a mode (partially unconscious), but I was definitely aware of what was happening. I touched down very soon. It was a very low-level ejection. Once I landed, it was all white. The terrain was all white because of snow. The first thing that woke me out of the ejection trauma were bullets being fired at my location. My next goal was to get cover."

Just half an hour later, he was ambushed by Pakistani soldiers, though not before he unloaded an entire magazine of bullets at them. "We carry a small pistol for safety. I could see about five to six people trying to ambush (me) where I had taken some cover. I fired the first round. And thereafter I was trying to finish off the rounds so I deter them and they don't come towards me. Unfortunately, the weapon we carry has a range of only 25 yards. Whereas they had AK-56s (assault rifles). So, I'm sure their bullets were going around me but I wasn't getting them, and before I could load the second magazine, they had come and captured me."

The soldiers of the Pakistani Northern Light Infantry who captured him were brutal, beating him badly till a senior officer emerged and ordered his men to back off. "The jawans who had captured me were trying to manhandle me and maybe trying to kill me, because for them, I was just an enemy pilot who had fired on their locations from the air. And on-ground, I was firing at them. Fortunately, the officer who came was very mature. He realised the situation, that I am now a captive and now I need not be handled that way. So he was able to control them, which was a big effort, because they were very aggressive at that stage." 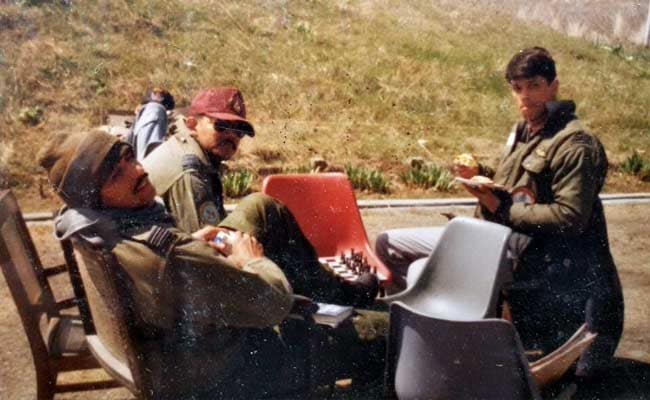 Group Captain Nachiketa, a day before he was captured

Bundled away in Pakistan Occupied Kashmir, placed before the international media publicly and tortured privately for information, Nachiketa had no idea of the efforts being made for his release. "Although the interrogation had started and I was aware I may not see a tomorrow back in India, that hope was always there: that I'll be back someday. I was tortured. Frankly speaking, I was not a source of real information for them. I'm sure they wanted to get to hear some things from me which could help them. But the only thing was, being an Air Force pilot, I didn't have much access to army plans."

Eight days after he was captured and after intense backdoor efforts made by the government of India to secure his release, Nachiketa was handed over to the Red Cross which brought him back to India where he was greeted by President KR Narayanan and Prime Minister Vajpayee as a hero.

For most, this would have been enough to call it a day. But K Nachiketa is clearly made of sterner stuff. Unable to return to fighter flying because of an injury to his back when he ejected over Kargil, Nachi, as he is known to his friends, was able to enter the Indian Air Force's transport fleet and continues to fly giant Il-76 transports. 17 years after Kargil, Nachi tells me, "The heart of a pilot is always in the cockpit."