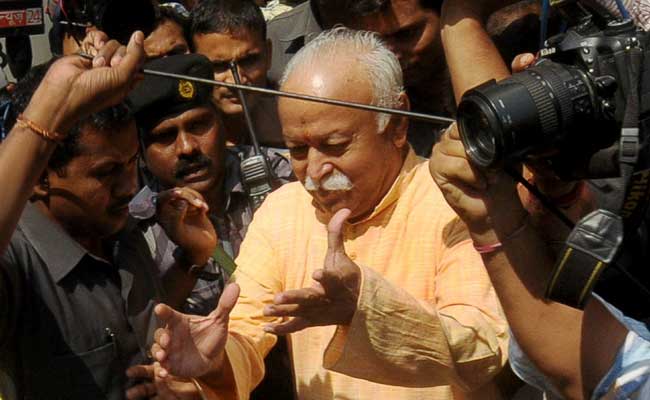 Mohan Bhagwat said the RSS was striving to raise people who were committed to the cause of creating a great India.

Lucknow: Amid the raging controversy over chanting 'Bharat Mata Ki Jai', Rashtriya Swayamsevak Sangh chief Mohan Bhagwat today said nobody needs to be forced to do it.

"We have to create such a great India where people themselves chant 'Bharat Mata ki Jai'...it need not be imposed," Mr Bhagwat said.

"We (India) have to show the way to the people of the world with our life and deeds. We do not want to win or defeat anyone. We don't want to impose our ideology and thoughts on anyone. We wish to show them the path because we accept them as our own," Mr Bhagwat said.

He said the RSS, the ideological mentor of the BJP, was striving to raise people who were committed to the cause of creating a great India.

The RSS chief had stirred a controversy recently with his remark that the younger generation needed to be taught to hail "Mother India".

In apparent retaliation, lawmaker from Hyderabad Asaduddin Owaisi had said he would not chant 'Bharat Mata Ki Jai' as he was not obliged to do it under the Constitution and that he would not do so even if a "knife is put to my throat".

The issue snowballed into a political slugfest with the Shiv Sena, BJP and other parties slamming the AIMIM party chief over his stand.

Maharashtra Assembly suspended a legislator from Mr Oawais's party after he refused to chant the slogan, while the Madhya Pradesh Assembly passed a censure motion condemning Mr Owaisi.