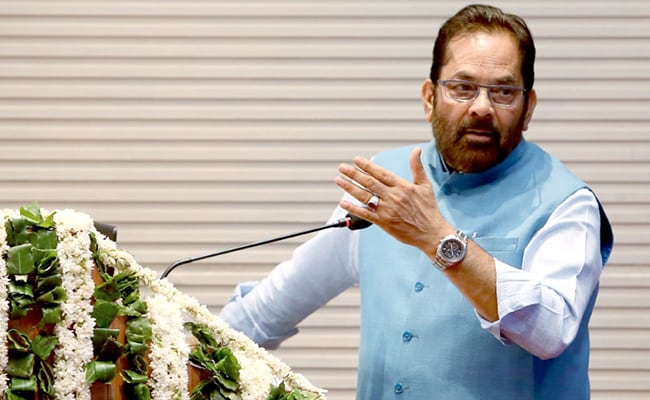 As the Uttar Pradesh government began a survey of private madrasas, senior BJP leader Mukhtar Abbas Naqvi on Friday said all such institutions should not be treated with suspicion but also asked why a fuss was being raised over the exercise.

The Uttar Pradesh government has decided to conduct a survey of all private madrasas in the state. This survey work will be completed by October 15 and the report will be submitted to the government by October 25 The former Union minister said communal politics was being done on the survey. "We should not raise doubts on all madrasas, but the row over the survey itself raises the question — why create a hubbub when there is nothing to hide," he asked.

Addressing party workers on the final day of a three-day training programme of the Uttar Pradesh BJP Minority Morcha at the Visvesvaraya Hall here, Mr Naqvi said the heinous history of brutality against humanity can never be a part of the DNA of any Indian community. But when people try to identify with the cruelty of foreign invaders, they actually help "nefarious elements" in their design to harm communal harmony in the country, he said.

Mr Naqvi said some people were trying to defame India through a fake and prejudiced propaganda of "Islamophobia". "We have to remain cautious of the caucus of conspiracies which wants to malign India's inclusivity and glorious cultural heritage," he said.

The BJP has demolished the "deceit of appeasement politics" with the "determination to development with dignity", he said, adding that it clearly reflected the "Modi-Yogi factor".

The "Modi-Yogi factor" has become a "guarantee of inclusive empowerment" by eradicating the "termite of corruption, communalism and casteism", he added.

Mr Naqvi also termed Prime Minister Narendra Modi a "visionary mass leader" who has made the common people a "precious partner of progress and prosperity". "Mr Modi has replaced politics of privilege with prominence to people, he said.

For some people and political parties, secularism is a "political deceit device" to grab votes, but for the BJP, it is a "draft of development" for unity in diversity, the former minister said.

Some "fringe elements" are fidgety and frustrated" due to the positive atmosphere of peace and prosperity under the effective leadership of Prime Minister Narendra Modi, he said.

Such people are conspiring to disturb the fabric of social and communal harmony in the society by spreading "fear and fallacy", Naqvi added.

"We have to work together to defeat these elements who want to create conflict and confrontation in society," he said.