The special session is set to commence on a stormy note on account of Speaker Vijay Kumar Sinha's stout refusal to resign. 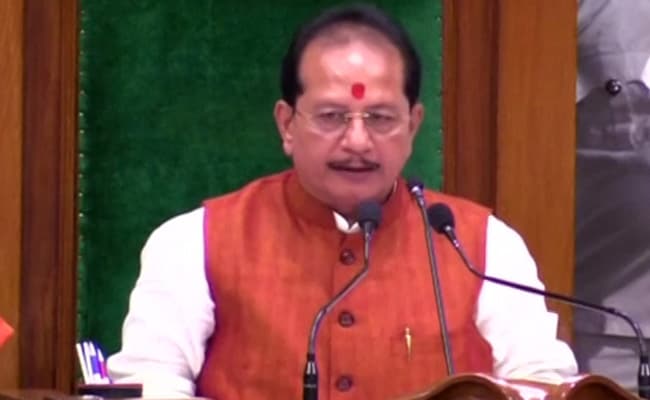 Speaker Vijay Kumar Sinha, who is a BJP MLA, refused to step down

Sparks are set to fly at the Bihar assembly on Wednesday when the BJP, now stripped of power and politically isolated, will try to hold its own against the mighty seven-party ruling 'Mahagathbandhan'.

The special session is set to commence on a stormy note on account of Speaker Vijay Kumar Sinha's stout refusal to resign despite the new ruling dispensation's motion of no-confidence against him.

If the assembly is not adjourned following the vote over the motion against the speaker, the new government headed by Chief Minister Nitish Kumar will also face the trust vote during the day.

Mr Sinha, a senior BJP leader, evidently enjoys the backing of his party which has vowed to take on "Paltu Kumar", a pejorative it has coined for the chief minister and his many volte faces, and the new government which has been formed through "back door", a charge the party has, ironically, been facing since 2017.

"We have not taken a decision on leader of the opposition in the assembly. That does not top the agenda. We are looking forward to exposing Paltu Kumar and this new government, formed through back door, which has brought a no confidence motion," said Nitin Nabin, a BJP leader who lost his ministerial berth to the cataclysmic political developments in the state.

The 'Mahagathbandhan', which comprises the chief minister's JD(U), besides RJD, Congress, CPI(ML), CPI and CPI(M), has a combined strength of more than 160 in the 243-strong House.

As such, there is little to worry for the new coalition which can comfortably vote out the speaker and proceed to prove its majority on the floor.

Nonetheless, Mr Sinha, who takes pride in having been "the first BJP leader to have become Speaker" of the state assembly, seems to have baffled his former allies by his obstinate stance.

"If he does not go on his own, he will be removed. It would have been better for him to resign honourably," said JD(U) leader Vijay Kumar Chaudhary, currently a minister, who preceded Sinha as the speaker.

Deputy Speaker Maheshwar Hazari too seemed confounded and when asked how would the ruling coalition stop Sinha from occupying the Chair, reacted with exasperation.

"If a rabid dog bites me, I cannot bite it back. The best I can do is to get myself treated," said Mr Hazari.

BJP OBC Morcha national general secretary and state spokesman Nikhil Anand alleged in a statement, "Nitish Kumar is using the deputy speaker, a Dalit, to get abuses hurled at the Speaker. In the process, the CM wants Dalits to get a bad name."