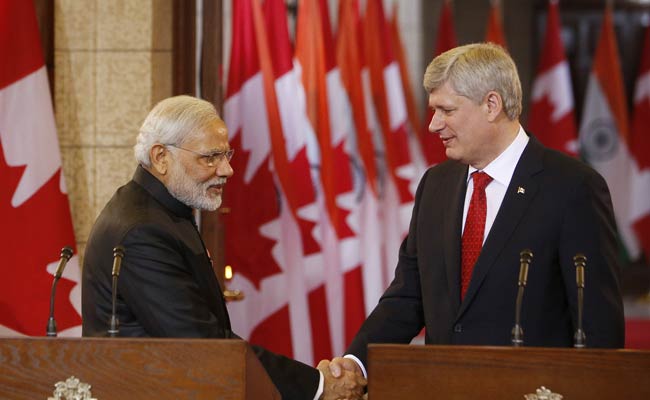 Canada on Wednesday agreed to supply 3,000 metric tonnes of uranium to energy-hungry India from this year under a $254 million five-year deal to power Indian atomic reactors, four decades after bilateral cooperation in this sector was frozen over India's nuclear programme.

The agreement for uranium supply, which came two years after protracted negotiations following the 2013 civil nuclear deal between India and Canada, was signed after comprehensive talks Prime Minister Narendra Modi had with his Canadian counterpart Stephen Harper.

Cameco Corporation will supply 3,000 metric tonnes of uranium over five years to India at an estimated cost of $254 million and the supply will start from this year, a top official said.

Canada is the third country to supply uranium to India after Russia and Kazakhstan. The supplies will be under the International Atomic Energy Agency (IAEA) safeguards.

Canada banned exports of uranium and nuclear hardware to India in the 1970s after it was alleged that New Delhi used Canadian technology to develop a nuclear bomb.

The two countries put this behind them with the Canada- India Nuclear Cooperation Agreement that took effect in 2013.

At a joint press conference with PM Harper, Prime Minister Modi said, "The agreement on procurement of uranium from Canada for our civilian nuclear power plants launches a new era of bilateral cooperation and a new level of mutual trust and confidence."

"The supply of uranium is important as India is keen to have clean energy. The world is worried about global warming and climate change. We want to give something to humanity through clean energy. It is costly but we are doing this for humanity. For us, uranium is not just a mineral but an article of faith and an effort to save the world from climate change," he said in response to a question.

PM Harper said, "There have been unnecessary frosty relations for too long (between the two countries) and it is time to move ahead."

Canada is the second-largest producer of uranium globally, with exports valued at over $1 billion per year.

PM Modi said the resource-rich country has the potential to be a key partner in India's national development priority.

Promoted
Listen to the latest songs, only on JioSaavn.com
"This is a growing relationship. Trade potential between our countries is enormous. Prime Minister Harper and I are committed to establish a new framework for economic partnership," the Prime Minister said, adding, "Ours is a natural partnership of shared values."

"Our relationship had drifted in the past. In recent years, Prime Minister Harper's vision and leadership changed the course of our relations," PM Modi said.

BJP Senses Defeat So They Are Inaugurating Projects: Akhilesh Yadav