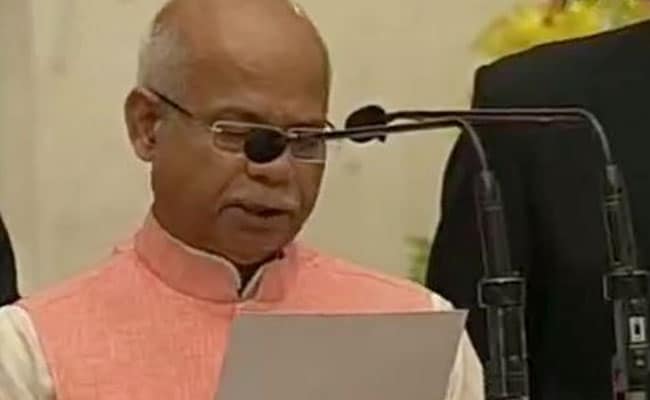 Shiv Pratap Shukla began his political career in the early 1970s as an ABVP leader.

New Delhi: Former Uttar Pradesh minister Shiv Pratap Shukla has got a place in Prime Minister Narendra Modi's newly rejigged cabinet. He has now become the Minister of State in the Ministry of Finance.

The 65-year-old politician from Gorakhpur, the citadel of Chief Minister Yogi Adityanath, is a Brahmin face of the BJP. His induction is being seen as a well-calculated move of the ruling BJP to reap dividends in the 2019 Lok Sabha elections.

Born in Khajni, Rudrapur in Uttar Pradesh, a village near Gorakhpur district Mr Shukla studied law at Deen Dayal Upadhyay Gorakhpur University. He started his political career in the early 1970s as a student leader of Akhil Bharatiya Vidyarthi Parishad (ABVP), and in 1981, was elected as the Provincial Secretary of the Bharatiya Janata Yuva Morcha (BJYM).

During Emergency, he was arrested under the Maintenance of Internal Security Act (MISA) and was in prison from 1975 to 1977. During his political journey, he initiated many rural development and welfare schemes.

Promoted
Listen to the latest songs, only on JioSaavn.com
He was appointed as a state minister in the BJP-led governments in Uttar Pradesh. He became a minister for jails in 1996-1998 under the Bharatiya Janata Party-Bahujan Samaj Party rule, a short-lived coalition government of Mayawati and Kalyan Singh, and was later appointed as the minister for rural development in 1998 under Rajnath Singh-led BJP government. Before this tenure, he also held a ministerial post during the Kalyan Singh-led BJP government of 1991-1992.