BJP lawmaker Vijay Goel said that people are playing politics on the roads. I would like to say that don't pollute the environment on Citizenship Amendment Act (CAA). 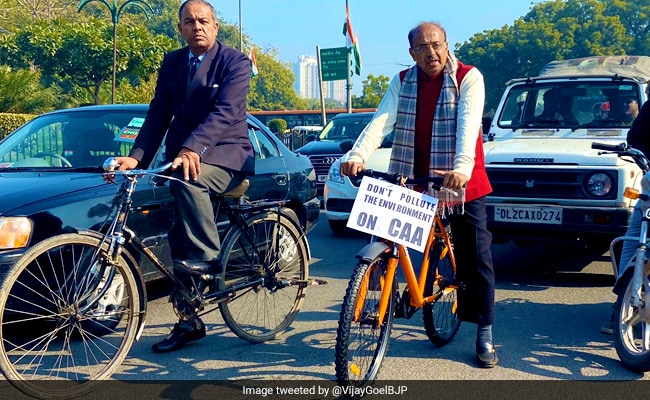 BJP lawmaker Vijay Goel on Friday arrived in the parliament for the budget session on a bicycle with a placard which read "Don't pollute the environment on CAA".

"I have to say this the country's environment is being polluted. When a law is passed then it is discussed with all the opposition but still, people are playing politics on the roads. I would like to say that don't pollute the environment," the BJP leader told ANI.

His remark comes after the opposition leaders staged a protest in front of the Gandhi statue in Parliament premises against the Citizenship Amendment Act (CAA) and proposed National Registrar of Citizens (NRC).

The leaders carried placards reading "Save India", "Save Constitution" and "No to CAA, NPR, NRC" and raised slogans "Stop the politics of hate" and "Save Our Democracy".

"The CAA and NRC will create division and hatred among the people of the country and endangers our democracy and secularism. Therefore, we have demanded that CAA be scrapped," Congress leader Ripun Bora had said.