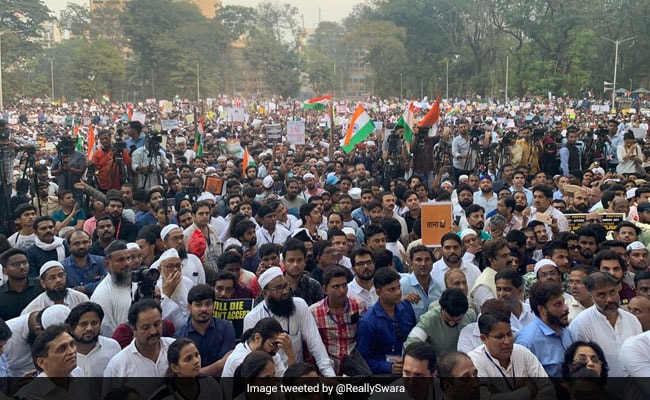 The Samajwadi Party on Friday promised pension for anti-Citizenship Amendment Act (CAA) protesters if voted to power, drawing a sharp reaction from the ruling BJP who said it was in the "DNA of that party to honour rioters and anti-social".

"If our party comes to power at the Centre and in UP, they (protesters) will be given pension as they have struggled to save the Constitution and the democracy," said Mr Chaudhary responding to a question.

He said they protect all those who seek refuge from them.

Referring to remarks of state BJP president Swatantra Dev Singh that Samajwadi Party chief Akhilesh Yadav should stay in Pakistan for a month to understand atrocities being on Hindus, the senior SP leader said the Narendra Modi-led Union government was out to divert people's attention from real issues.

Anyone raising a question is being asked to go to Pakistan, he alleged.

Later, Deputy Chief Minister Dinesh Sharma lashed out at the Samajwadi Party, saying, "It is in the DNA of that party to honour the rioters and anti-socials."

"They had also tried to withdraw cases against terrorists in the past and the court had to intervene. It is unfortunate that SP leaders are speaking about giving citizenship rights to the Bangladeshis and Rohangiyas," Mr Sharma alleged.

Commenting on Akhilesh Yadav's statement that he would not fill form for the National Population Register, the UP deputy CM said," Perhaps, he is not aware that the NPR is the basis of all development schemes. He is conspiring to deprive people of welfare schemes."

The deputy chief minister alleged that the opposition parties, including the SP, BSP and the Congress, were "competing to appease anti-social elements".

"There is another kind of 20-20 match going on between the SP, BSP and the Congress to outsmart each other in appeasing and encouraging anti-social elements," Sharma said.

On Akhilesh Yadav's allegation that 1,000 children have died in Gorakhpur in the past year, Sharma said he needed to furnish evidence instead of levelling baseless allegations.