After Arun Jaitley Gets Award From Manmohan Singh For GST, A BJP Jibe

The award was shared by petitioners against Section 377 of the Indian Penal Code, who managed to get a draconian law against same-sex relations quashed in a historic judgment last September. 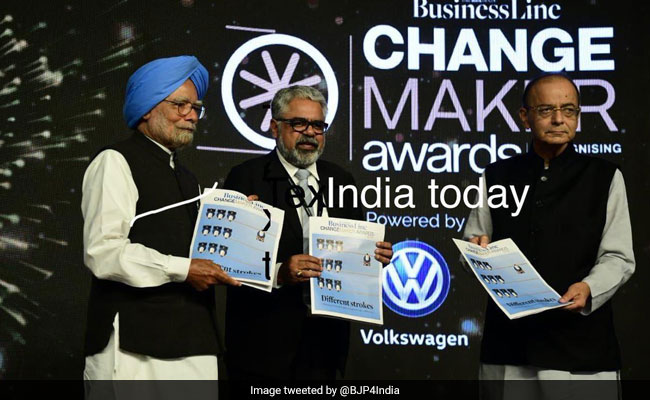 Former Prime Minister Manmohan Singh on Friday presented the BusinessLine Changemaker Of The Year award to Union Minister Arun Jaitley for successfully introducing the Goods and Services Tax (GST), giving the BJP an opportunity to heckle the Congress on social media.

Mr Jaitley accepted the award from Dr Singh on the behalf of the GST Council at a glittering ceremony attended by over 200 guests in New Delhi. The award was shared by petitioners against Section 377 of the Indian Penal Code, who managed to get a draconian law against same-sex relations quashed in a historic judgment last September.

The Congress has often accused the Narendra Modi government of hastily implementing the GST in 2017, causing untold hardships to citizens as well as small businesses. By calling it "Gabbar Singh Tax", party president Rahul Gandhi meant to say that it is as merciless on the people as the iconic villain played by late actor Amjad Khan from the 1975 classic Sholay.

Even Dr Singh had criticised the centre for implementing the GST regime close on the heels of the demonetisation initiative. "What is the net impact of demonetisation and the hasty implementation of the GST? It led to a slowdown of our economic growth," he said at a Kochi rally in 2017.

Prime Minister Narendra Modi recently said in a rally that although the GST initially caused some distress to people, they eventually came around to appreciating its benefits. Highlighting how tax rates for 1,200-1,250 items of daily use were lowered under the new system, he said: "Tax rates were brought down to 18% for some, 12-5% for others, and even 0% for certain items. We did this after acquiring public feedback."

He also said it was "unfortunate" that the opposition was creating such a hue and cry over a new system that's bound to transform the country.