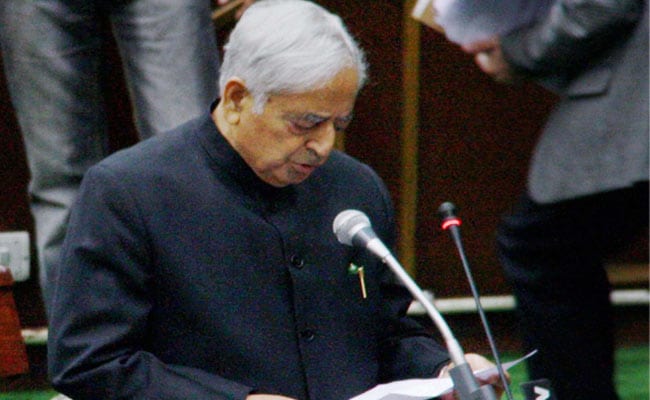 The maiden 23-day-long budget session of the Mufti Sayeed Government in Jammu and Kashmir Assembly will begin today. The budget would be presented on March 22 and general discussion on budget will be held on March 23 and 24, he said.

Accordingly, the demands for grants for various departments would be presented from March 25 to March 29 and the Appropriation Bills and Private Members Bills will be taken up on March 30 and March 31.

The 23-day Assembly session, the first session of the Mufti Sayeed-led PDP-BJP Government, is expected to be very stormy and uproarious in view of the issues like AFSPA, Afzal Guru and Article 370, likely to be raised by various parties targeting the government.

Session will be starting from March 18, with the Governor's address to Legislature and the House sittings would continue till April 9.

"Discussion on motion of thanks on the Governor's address and reply thereto will be held on March 19 and March 20," Secretary, Legislative Assembly, M Ramzan said.

Hitting out at the BJP-PDP coalition for total u-turns on the ideological issues of self-rule, Article-370, One-constitution, one flag (Eik Vidhan and Eik nishan) and delimitation of coalition partners, the Congress sought replies over "double standards".

"For remaining in power, PDP and BJP have compromised with their basic ideological issues and deceived the people. Our Legislative party will seek replies from them and grill them on the issues," Jammu and Kashmir Pradesh Congress Committee (JKPCC) president Gulam Ahmed Mir told reporters yesterday.

"We will question the two coalition partners... where is the self-rule slogan of PDP, where is Eik Vidhan and Eik Nishan and scrapping of Article 370 in J-K... as they had promised...?" Mr Mir said.

"We will play the role of effective opposition and expose the government," National Conference MLA Devender Singh Rana said.

BJP said it will oppose the resolution moved in the state Assembly by an independent MLA seeking mortal remains of Parliament attack convict Afzal Guru and hoped that its coalition partner PDP will support them.

"We are sure that PDP will support us and we both will oppose it (resolution on Afzal Guru)," BJP state spokesman Sunil Sethi told reporters yesterday.

Promoted
Listen to the latest songs, only on JioSaavn.com
PDP MLA Yasir Dilwar Mir said that it is the humanitarian issue to grant the mortal remains of Afzal Guru to his family.

"The government has already raised the issue with the Centre. We feel it will be addressed," he said.