"What was the need for a Chief Minister to say that he will remain in the post for remaining two-and-half years? Did any of us question? Let him be there for two years or one year...," Congress Karnataka president DK Shivakumar said. 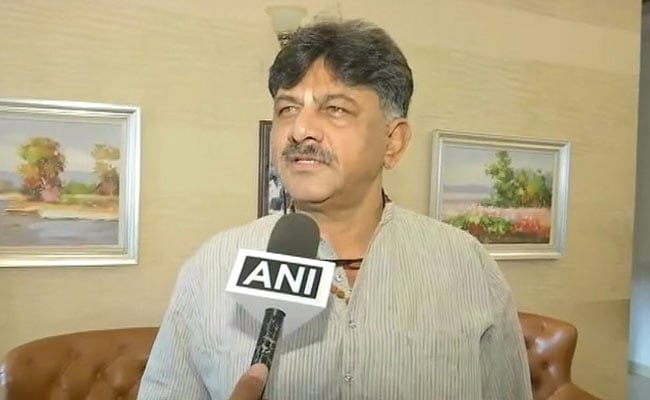 "His own MLAs are saying that a new leader will come after January 15," DK Shivakumar said (File)

Congress Karnataka president DK Shivakumar on Friday said Chief Minister BS Yediyurappa's self-certification about completing his tenure was an indication about the "danger" that is worrying him.

"What was the need for a Chief Minister to say that he will remain in the post for remaining two-and-half years? Did any of us question? Let him be there for two years or one year...," Mr Shivakumar said.

Speaking to reporters, he said maybe some worry is troubling him and that's the reason why the Chief Minister is making such statements.

"His (Mr Yediyurappa's) own MLAs (from (BJP) are saying that a new leader will come after January 15. If a time has come for the Chief Minister to give certification to himself, it is then evident that somewhere something was dangerous," he added.

The KPCC President was responding to a question on Mr Yediyurappa's assertion that he would complete his term.

There has been intense speculation in some quarters that the BJP high command is mulling leadership change in Karnataka in the days to come considering Mr Yediyurappa's age (77), which the party has dismissed.

Stating that he was satisfied with the Congress' performance in the Gram Panchayat polls, Mr Shivakumar claimed the party and workers despite pressure, also misuse of money and power from the ruling party, worked efficiently and got a "good result".

"Despite being in opposition we have got good numbers," he said, adding that from January 5 to 18 he will be touring across the state and 2021 will be the "Year of organisation" and "Year of Struggle" for Congressmen.

Hitting out at the government for its "failure" in containing the UK variant of coronavirus, Mr Shivakumar wanted to know what was the difficulty in checking travellers at the airport itself.

"It is basic common sense. This shows how much the administration has failed," he said as he blamed the Central and the state governments for the spread of the virus alleging they failed in implementing control measures in the early stages.