Britain's Theresa May In India On 3-Day Visit, To Meet PM Modi Today 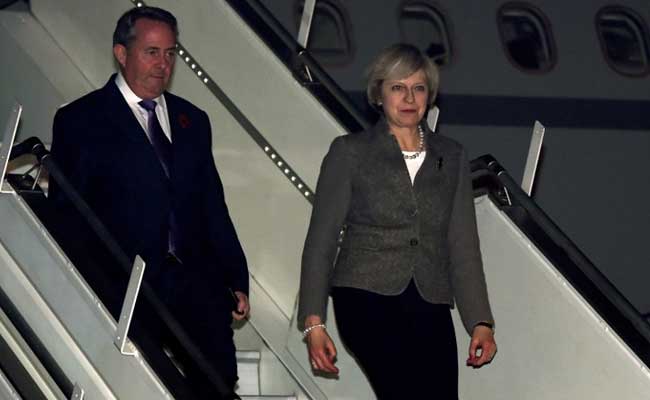 London: British Prime Minister Theresa May arrived in Delhi on Sunday evening on a three-day India visit. This is her first bilateral engagement outside Europe since taking office in July.

The 60-year-old leader's visit is aimed at enhancing Indo-UK ties in the key areas such as trade, investment, defence and security. Ms May is being accompanied by 40 business delegates from UK companies which will showcase itself at the Tech Summit in Delhi.

But this pitch by Britain is at a time the pound has fallen by nearly 20 per cent, the economy has taken a huge hit and jobs could be lost in London post Brexit - UK's exit from the European Union.

Ms May on first day will hold talks with Prime Minister Narendra Modi, who will host her for lunch post the Tech Summit.

"Both PMs will have a number of issues to discuss and clearly PM Modi will want to know the impact Brexit may have on India. These are early days but I can tell you that this indicates that Britain wants to forge a stronger, fruitful and prosperous relationship than ever with India", said Shailesh Vara, Conservative MP in the UK.

The two leaders are expected to discuss a possible Free Trade Deal between the countries now that Britain is preparing to leave the EU.

The UK PM will also travel to IT city Bengaluru on Tuesday and visit manufacturing plants before flying back to London. She is also expected to meet the Karnataka Chief Minister Siddaramaiah.

British PM's three-day visit comes in the backdrop of the historic June referendum favouring Brexit and as part of the new May-led government to step up engagement with countries outside the 28-nation European Union.

"If anything, I see further tightening of visa rules. Free Trade Deal with India will be tough because I see India then automatically asking for liberalisation of visas as a quid pro quo. I think trade with India will be difficult in the years to come because of the new centrality over immigration." said political analyst, Professor Anand Menon of King's College London.

Before leaving London, Ms May described India as the UK's "most important and closest friend" and a leading power in the world. "We will be promoting the best of Britain, sending out the message that we are open for business, and making the most of the opportunities offered by Brexit as the world's foremost champion of free trade," she had said.
Comments
Theresa May in IndiaPM ModiIndo UK bilateralUK PMUK PM In IndiaIndia-UK Tech Summit

Relief For Hindustan Unilever Against Emami Over Glow & Handsome: Report