The videos are clearly designed to incite communal hatred, violence and acts of terror against one specific community by another community, says CPI(M) Polit Bureau member Brinda Karat. 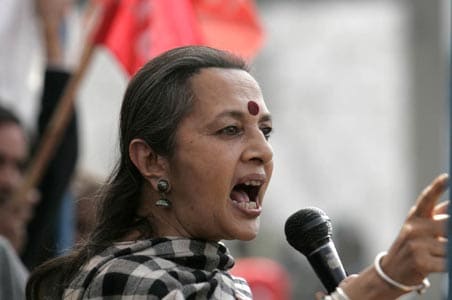 CPI(M) Polit Bureau member Brinda Karat has written to Home Minister Amit Shah demanding action against YouTube for allowing circulation of some videos which she alleged were designed to "incite communal hatred".

Ms Karat has also written a similar letter to Deputy Commissioner of Police (Central) Mandeep Singh Randhawa listing links to some of the videos.

"I am writing to you in connection with a number of videos... on YouTube channel and WhatsApp groups which are clearly designed to incite communal hatred, violence and acts of terror against one specific community by another community... Another video threatens those who do not say 'Jai Shri Ram' will be sent to the graveyard," she said in the letter to Amit Shah.

In the letter to the DCP, she identified videos targeting Muslims.

"These videos are highly offensive, menacing, threatening and incite violence against a specific community by another community," she said.

She said the videos and their circulation constituted criminal acts under the IPC and the IT Act and also under the laws against acts of terror.

"There is no doubt that by allowing circulation of such anti-national material on their channel, the owners/controlling authorisers of YouTube channel are also guilty. Since YouTube has a worldwide reach, such communal hate and highly provocative videos emanating from India seriously damage India's image across the world and could have dangerous consequences," she said and demanded registration of an FIR.

Ms Karat said as the home minister, Amit Shah had the responsibility to ensure the security and well-being of all of citizens and urged him to take strong action in the case.

She also demanded that YouTube be forced to remove the video and stop the circulation of the offensive material.