Read inOther Languages
This Article is From Feb 18, 2020

Terming the Citizenship Amendment Act as "divisive and discriminatory", she said it is India''s tragedy that instead of external forces, the central government itself is engaged in "weakening the Constitution and dividing the country". 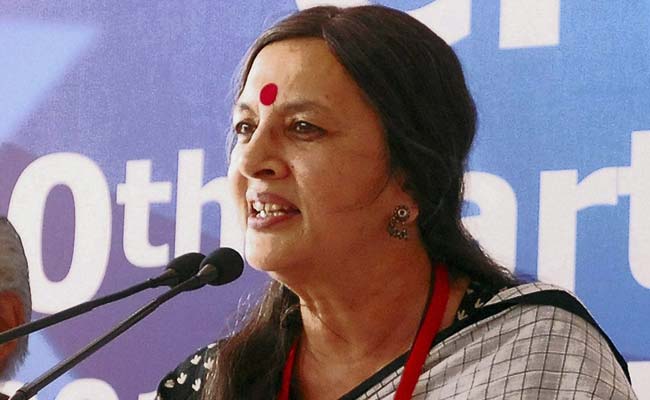 CPI(M) leader Brinda Karat has asked why the Rohingya and Ahmadiyya Muslims, facing persecution in Myanmar and Pakistan, are not covered under the new citizenship law if the Centre is so much concerned about people facing atrocities in neighbouring countries.

Terming the Citizenship Amendment Act as "divisive and discriminatory", she said it is India's tragedy that instead of external forces, the central government itself is engaged in "weakening the Constitution and dividing the country".

She also hit out at the Rashtriya Swayamsevak Sangh, alleging that in 1950, when the entire country welcomed the Constitution drafted under the leadership of Dr BR Ambedkar, "the RSS was the one which opposed it".

"They call them ''Rashtriya Swayamsewak Sangh'', but it is ''Rashtriya Sarvanash (destroyer) Sangh''," Brinda Karat said. She was addressing a protest against the CAA, the proposed countrywide National Register of Citizens (NRC) and the National Population Register (NPR), largely attended by Muslim women, at Jaistambh Chowk here on Monday night.

The protest site has been dubbed as ''Shaheen Bagh of Raipur'' by the protesters.

"You (Centre) are saying that you have love and concern for the persecuted people in neighbouring countries.

We agree that such people should be given shelter. But only three countries - Pakistan, Afghanistan and Bangladesh - are our neighbours? Are there no persecuted people in Nepal, Myanmar, Sri Lanka?" Brinda Karat asked. She sought to know why there is no mention of Tamils in CAA, despite over one lakh Tamil refugees living in India.

"Why you (government) don't have feelings for Rohingyas and Ahmadiyya facing atrocities in Myanmar and Pakistan (respectively). Why the two sects were not included in the new law. Is it because they are not Hindus? You are not concerned about persecuted people, rather you are projecting your narrow agenda," she alleged.

Some (religious) communities were "selectively" included in the CAA and it does not cover the persecuted people, she claimed.

Brinda Karat said the CAA is "aimed at changing the social fabric and nature of the Constitution" and it will not only affect Muslims but the entire nation.

The implementation of CAA in the entire country will be a great success for the BJP and RSS towards fulfilling their agenda of making India a ''Hindu Rashtra'', she said.

She also accused Prime Minister Narendra Modi and Union Home Minister Amit Shah of making a "mockery" of democracy and asked why FIR was not registered against two BJP leaders after they made objectionable remarks during the campaign for the Delhi Assembly elections.

"In Delhi, a Union minister said ''goli maaro'', while a BJP MP said people protesting at Shaheen Bagh will enter homes and rape women. But, so far no FIR has been registered against them...how a heinous crime of rape can be linked with religion or caste? They tried to give a communal colour to the incident of rape," Brinda Karat alleged without taking any names.

Union minister Anurag Thakur made the "goli maaro..." (shoot) remark during a public meeting in Delhi, while the ''rape'' comment was made by BJP MP Parvesh Verma. Brinda Karat also rejected the government''s claim that the CAA has no link with the NRC and NPR.