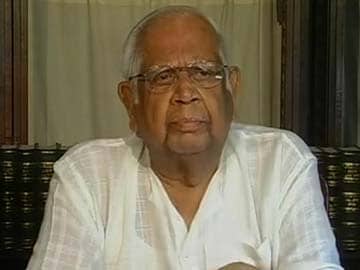 Somnath Chatterjee, who was Speaker for five years, described the job as 'not easy'

New Delhi: The lawmakers who vandalised and shamed Parliament on Thursday should be expelled and a criminal complaint can be filed against them, Somnath Chatterjee, a former Speaker of the Lok Sabha has said, calling for the strongest possible action.

Mr Chatterjee, who is also a senior lawyer apart from having been a nine-term MP, told NDTV on Thursday, "What happened in Parliament is a matter of great shame. Today's events diluted parliamentary democracy in India. The MPs who misbehaved should be expelled and a criminal complaint filed against them. They should suffer, according to me"

On Thursday, as Home Minister Sushil Kumar Shinde tabled the controversial Telangana Bill in the Lok Sabha, Members of Parliament who oppose the bifurcation of Andhra Pradesh to create a Telangana state descended into the well of the House and for five minutes constructed an unprecedented riot.

Expelled Congress MP L Rajagopal unleashed an aerosol of pepper spray and used it on his fellow lawmakers. Venugopal Reddy, a member of the Telugu Desam Party, was seen brandishing what his panicked colleagues thought was a knife. He later explained, with a sense of accomplishment, that he what he held in his hand was a mic he had yanked out. He was also seen snatching papers from the Speaker's podium.

A computer was flung and a glass table shattered as the group attempted to ensure that the bill was not introduced. These lawmakers belong to Seemandhra, the two regions in Andhra Pradesh opposed to the bifurcation of the state. They have sworn to ensure that Parliament will not approve the plan to create Telangana by splitting their state.

Mr Chatterjee, who was Speaker for five years, described the job as "not easy" at a time when, he said, "politics in India has become confrontational."

Promoted
Listen to the latest songs, only on JioSaavn.com
Ms Kumar, he said must be given more time to act against the MPs. "I believed disrupting MPs should suffer. But decisions cannot be taken immediately," Mr Chatterjee said.