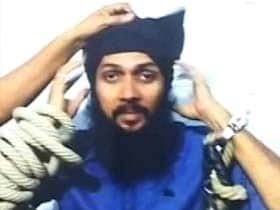 Patna: Yasin Bhatkal was restless and hardly slept during his first night in a government guest house after being arrested in Bihar, said officials. Early this morning, he was interrogated by members of the National Investigating Agency; he was flown to Delhi in a special plane later in the day.

Bhatkal, an alleged co-founder of terror group Indian Mujahideen, was arrested in a top secret operation on Wednesday night.

Yesterday, he was questioned by top officers of the Bihar Police and the  National Investigating Agency. Sources say that he denied the Mujahideen's involvement in a series of bomb blasts in the pilgrimage town of Bodh Gaya in July, but said of the attacks, "Good... it seems there are other people like us working for the same purpose."

Bhatkal is wanted by the police in 12 different states for allegedly masterminding and executing some of India's deadliest terror attacks, in which hundreds have been killed.

In a court in Northern Bihar last evening, where he was escorted by nearly 50 policemen, Bhatkal told the judge about the bomb blasts that he is accused of, "Such things (bomb blasts) happen all the time...there's nothing new about this."

Promoted
Listen to the latest songs, only on JioSaavn.com
Bhatkal, who belongs to coastal Karnataka, was found along the border with Nepal with another alleged Mujahideen member named Asadullah Akhtar.