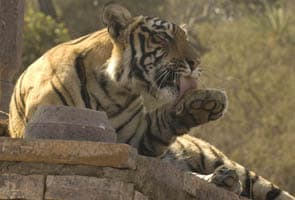 Don't fret too much about the title just yet; you'll see the light soon enough. Let me first invite you into the wilds. Picture this - one morning you wake up to the heat in Delhi, the next, a herd of deer just 50 meters away from your window and blissful cool breeze wafting through your bedchamber. That just about sums up the enthralling experience of being at the Bandipur National Tiger Reserve in the heart of South India.  To boot, my guest was the positively eccentric Chitrangada Singh. NDTV and Aircel's Save Our Tigers campaign needs all the support it can garner and for Chitrangada to volunteer for the cause is a statement in itself.

Our intent was to highlight the issues that have been continuously surfacing in the fight to save India's national animal. Think about it, does the Tiger cross your mind even for a second in an entire week? Can you picture a world without Tigers? At the moment the issue is akin to a rope tied around our neck. OK! Enough lecturing!

Paradigm shift to Tiger's scat. I enjoyed speaking to Chitrangada about those unbelievable Tiger facts that are simply hard to believe. So scat or poop is not something that interests you and I, but a tiger conservationist or Tiger scientist's excitement is of orgasmic proportions at its sighting. No, they are not weird! Tiger scat reveals everything you would want to know about a Tiger in that area short of the advantage of securing an interview with the concerned animal. Imagine putting these questions to the Tiger:

Sir, what did you eat for lunch? Which sanctuary are your parents from? How healthy are you feeling? Could you give me a sample of your DNA?

Makes sense now? I digested that knowledge but the next bit blew me! I was told that a Tiger can mate up to 210 times in 3 days. How is that even possible? Apparently, a Tigress is on heat for 3 days but only one hour in those 72 hours is ripe for the occasion. Get the drift? So, the Tiger seizes the day and becomes the most opportunistic being on the face of the earth. It took me a long time to figure out whether I was in awe, just jealous, or simply both.

Now, imagine the perplexed look on my producers face when I insisted on briefing Chitrangada about these revelations. Chitrangada thought I was referring to the song 'I'm a scatman' at first and we both broke into a jig before I let the reality hit her. On the other more sexual aspect a simple 'don't even think about it' smile sufficed.

But this experience was an eye opener in many other ways. Chitrangada was pleasantly professional. We fell back on our schedule due to a number of circumstances on the first day, and Chitrangada readily offered to start shooting the next day as early as 5 AM. We learnt about Anti Snare walks that forest officials take in order to detect the traps set by poachers. I even managed to get caught in one while trying to be chivalrous considering Chitrangada was walking with me.  After which I wished I could meet the gentleman who invented chivalry and give him a piece of my mind.

The safari was fun. Chitrangada and I were 15 meters away from an elephant and her calf - dangerous and awe inspiring. We were also introduced to animals such as the majestic Gaur and the graceful Sambar. Now, this is what brings me to the title I chose for this article. The phrase Crouching Tiger Hidden Dragon means hiding your strength from others and the element of surprise. Ndtv and Chitrangada attempted to use the element of surprise but the Tiger simply hid from us. We did not see the animal we came for. But then again we didn't expect to. We expect to make a difference. A difference, that can ensure our children do not find themselves in the same predicament. The predicament of not being able to spot a Tiger because it is still on the verge of extinction.

Promoted
Listen to the latest songs, only on JioSaavn.com
To pacify myself, I thought of the fact that the eye of the tiger is 6 times stronger than us humans. We were clearly not handsome enough for the big cat but he should have spotted the star brigade who came with starry eyes to find him.

I'll end this refreshing experience by borrowing a line from the song I'm listening to right now and dedicate it to the Tiger- Either, you watch me fall apart, or give me shelter and forever I'll be yours to keep.