Shatrughan Sinha said PM Modi should speak the truth on the agreement between India and France on the Rafale deal. 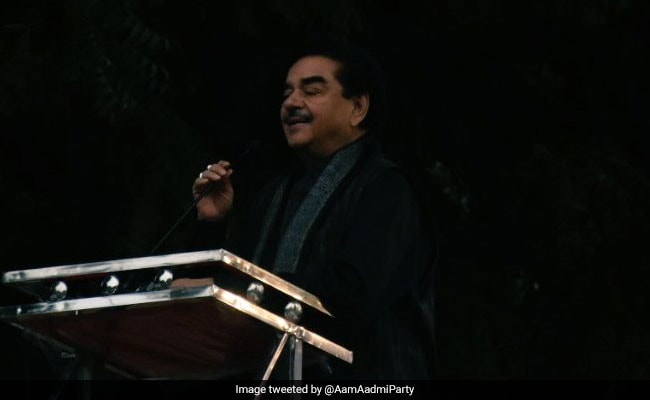 "It is not about a friend, it is about saving the country," Shatrughan Sinha said at the rally

Dissident BJP lawmaker Shatrughan Sinha on Wednesday joined a rally of opposition leaders in the heart of Delhi and took a jibe at Prime Minister Narendra Modi, asking whether the PM's "56-inch chest" would reduce in size if he spoke on the Rafale fighter jet deal.

Shatrughan Sinha said PM Modi should speak the truth on the agreement between India and France on the deal, because as prime minister, he was accountable to the nation. The scathing attack came on a day the government's auditor - Comptroller and Auditor General or CAG - report was tabled in parliament and said that the deal sealed by PM Modi's government is 2.8 per cent cheaper than the one negotiated by the previous Congress-led UPA government.

"Why cannot he reply to the nation, will his 56-inch chest squeeze to six-inch?," he asked.

Shatrughan Sinha even egged on the crowd on the issue, as they chanted, "Chowkidar Chor Hai".

The Congress and its chief Rahul Gandhi have used this slogan to target PM Modi over the Rafale issue and Shatrughan Sinha's participation and comments at the opposition rally may lead to more bitterness between him and the ruling BJP.

The rally was hosted by the Aam Aadmi Party (AAP) at Jantar Mantar, during which leaders of various opposition parties, including Delhi Chief Minister Arvind Kejriwal and his West Bengal counterpart Mamata Banerjee tore into PM Modi and the BJP, saying the two should be "ousted" in the upcoming Lok Sabha polls as they were a "threat" to democracy and constitutional values.

Shatrughan Sinha, the MP from Patna Sahib in Bihar, joined the rally mid-way and trained his guns at his own party's government at the centre.

"I give my wholehearted support to this (rally). It is not about a friend, it is about saving the country. For me, the party is above me, but the country is above the party," he said.

There was a "huge gulf" between promises made and the performances of the ruling party, Shatrughan Sinha added.

"If farmers are suffering, institutions are facing a crisis and people are facing political vendetta...should we stay mum? I did not join politics for selfish reasons," he said.

Taking a dig at the prime minister, Shatrughan Sinha said in 2014, a "Modi wave" was projected as "not just a ray of hope, but a beam of light".

"They say there was a Modi wave in 2014. Then, why did Arun Jaitley lose (the polls) from Amritsar? But, he was rewarded with four ministries in the cabinet," he added.

Shatrughan Sinha also alleged that "sycophants are lined up and paeans being sung.

He also criticised the electrification scheme of the centre, promises made to farmers and assurances of jobs to the youth.