The Delhi Jal Board, however, said the utility has been supplying water beyond its capacity and the BJP is "politicising the issue" instead of helping people. 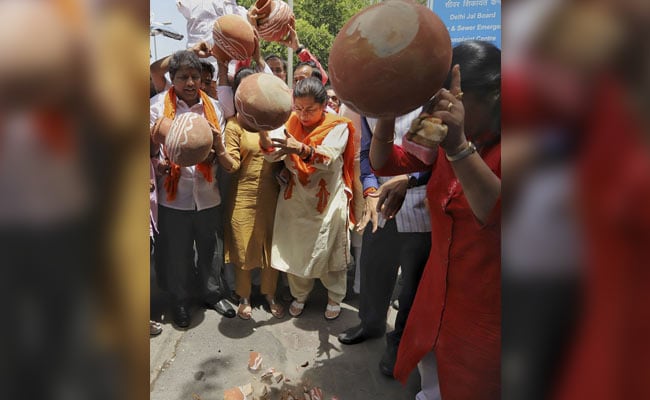 BJP lawmaker from New Delhi Meenakshi Lekhi today protested outside the Delhi Jal Board's RK Puram office against "water woes" being faced by the people of her constituency.

She claimed that even municipal areas are facing water shortage and many places in her constituency lack piped water supply.

The Delhi Jal Board (DJB), however, said the utility has been supplying water beyond its capacity and the BJP is "politicising the issue" instead of helping people.

"Lady Hardinge staff quarters, and upper regions of Anand Parbat and Baljit Nagar lack piped water supply. Then there are areas like Naraina, Krishna Nagar and Arjun Nagar which have piped water supply, but there's no water for the past 10-15 days," Ms Lekhi claimed.

"There are regions that complain of pathetic water quality... This is all across RK Puram and every other place. There are places, such as Munrika village, where sewage water gets mixed with potable water," she alleged.

"I think the Delhi government's priorities are misplaced. Most women in Delhi are suffering due to water paucity and (Arvind) Kejriwal wants to give them free rides in the Delhi Metro," she said.

The DJB's water distribution system is old and ailing and no work has been done on this for 30-35 years, she claimed.

DJB vice-chairman Dinesh Mohaniya said the BJP has been politicising the issue. "In many areas, such as in Anand Parbat, geographical constraints don't allow the DJB to lay water and sewer pipelines. They always tell half truth," he said.

"It's not that only Delhi has been facing issues. The entire country is reeling under a severe heatwave and facing water shortage. We have been supplying water beyond our capacity. Our supply hasn't declined, but the demand has been increasing due to the oppressive heat," Mr Mohaniya said.

"All rivers, lakes and ponds across the country are running dry. But, instead of helping people in such a situation, the BJP is politicising the issue," he alleged.