The Assam minister made this claim at a massive BJP rally held in support of the Citizenship Amendment Act at Guwahati's Jagi Road on Friday. 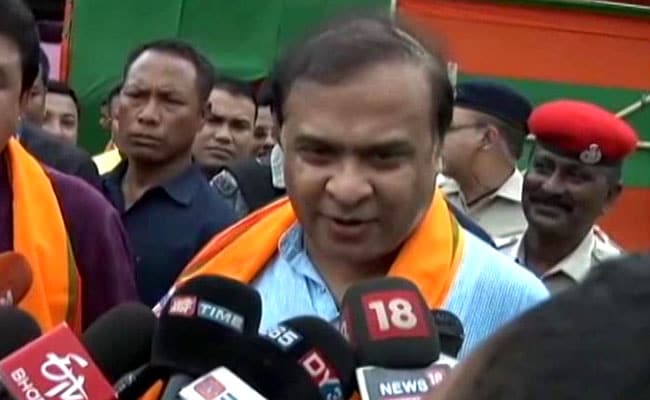 The cut-off for the Citizenship Amendment Act (CAA) was set at 2014 because the BJP-led centre has no choice but to shoulder the burden of "mistakes" committed by the Congress until that year, Assam Minister Himanta Biswa Sarma has said.

Mr Sarma made this claim at a massive BJP rally held in support of the CAA at Guwahati's Jagi Road on Friday. The biggest political event of the kind since violence erupted against the controversial law earlier this month, it was seen as a show of strength ahead of Congress leader Rahul Gandhi's visit to the city to lead an anti-CAA protest on Saturday.

"The cut-off date for the Citizenship Act is 2014 because the BJP has been shouldering the burden of mistakes committed by the Congress from 1972 to that year. While migrants have been streaming into the state from 1972, not even an ant could enter after Narendra Modi became the Prime Minister in 2014. He even told Bangladesh Prime Minister Sheikh Hasina to ensure that not even a single Hindu there is touched," Mr Sarma said at the rally.

Assam was ruled by the Congress for much of the last seven decades.

Mr Sarma also assured the people that new migrants will not be allowed to enter Assam. "The three to four lakh people who are eligible to apply under the CAA are already here, and have built houses for themselves. A few have even became MLAs," he said.

The BJP politician also claimed that the Congress was more keen to let Muslims into the state. "There was no protest or opposition when the Citizenship Act was amended during the time of Rajiv Gandhi and PV Narshima because it talked about the inclusion of chachas and mamas," he said.

The CAA, for the first time, makes religion the test of citizenship in India. The government says it will help minorities from three Muslim-dominated countries get citizenship if they fled to India before 2015 because of religious persecution. Critics say it discriminates against Muslims and violates the secular principles of the constitution.

Violent protests had erupted in Assam and other parts of the Northeast even as the centre was passing the Citizenship Amendment Bill through parliament, resulting in the death of five agitators.

Over 25 people have died in agitations across the country so far.