"BJP Will Be Reduced To Its 2012 Tally": UP Ex Minister Who Recently Switched To Samajwadi Party

The high profile exit of SP Maurya along with two other colleagues in the Yogi Adityanath cabinet was viewed by many as a consolidation of the electorally powerful OBC bloc in favour of the opposition coalition. 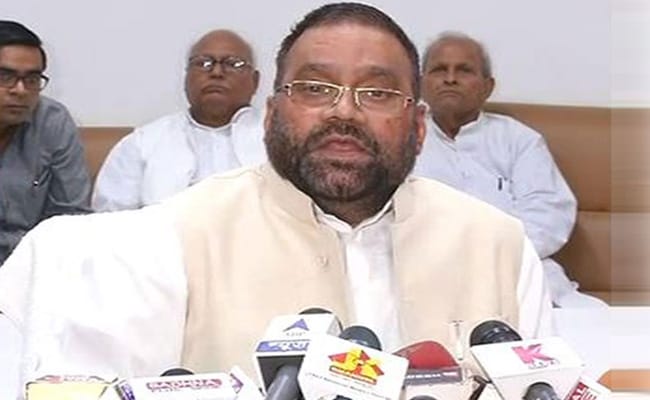 The BJP in Uttar Pradesh will be reduced to its 2012 tally of 47 or thereabouts as the wind is blowing in favour of the Akhilesh Yadav-led coalition this election, says Swami Prasad Maurya who left the BJP to join the Samajwadi Party last month.

The high profile exit of the former state minister along with two other colleagues in the Yogi Adityanath cabinet and some legislators was viewed by many as a consolidation of the electorally powerful Other Backward Classes (OBC) bloc in favour of the opposition coalition.

“The BJP will reach its 2012 figure… and the SP will form the government with an overwhelming majority. After March 10 (counting day), the BJP will come to know whether the OBCs are actually with them or not,” Maurya told PTI in an interview here.

Discussing his chances of becoming deputy chief minister in the event of the SP-led opposition forming government, the 68-year-old OBC leader said he had been driven by ideology, in support of  the poor, Dalits and backward sections, rather than ambition in his political career.

The legislator from Padrauna will be contesting from Fazilpur in Kushinagar district in the assembly elections beginning later this month and will file his nomination papers on Friday.

He dismissed talk of threats from former Congress leader RPN Singh, who joined the BJP recently, forcing him to change his assembly seat.

"The seat has been decided by the party president keeping the equations in mind."

To another question if the RPN factor triggered the decision, Mr Maurya said, "Not at all. And what election will he (RPN Singh) fight? Anyway, he is not going to contest the polls. Even if he decides to contest the current polls, the candidate put up by us will defeat him."

Mr Maurya, who grabbed headlines when he switched sides, also made it clear he is going to contest from only one assembly seat.

RPN Singh's move to join the BJP was seen as compensating the saffron party's loss from the Maurya and other OBC leaders particularly in the Purvanchal region, which comprises 167 seats in the 403-member Uttar Pradesh house.

Mr Maurya and RPN Singh have been traditional political rivals. After losing against RPN from the Kushinagar Lok Sabha seat in 2009, Maurya had been regularly winning elections from the Padrauna assembly segment.   Voting in Kushinagar will take place on March 3 in the sixth phase of polling.

Mr Maurya, who had crossed over to the BJP from the Bahujan Samaj Party (BSP) before the 2017 assembly polls, hit out at the ruling party saying that it does the opposite of what it proclaims.

He said the BJP gives slogans of nationalism but actually sows seeds of division in the country and society by using the slogan of 80-20.

Yogi Adityanath had recently said 80 per cent of people were with them while the rest 20 per cent has always been opposed to the party, a statement which was read in the political circles in terms of population of Hindus and Muslims in UP.

Highlighting problems faced by farmers, Mr Maurya said farmers are forced to spend nights under the sky to protect their crops from stray animals.

In his view, the three farm laws were withdrawn as elections were approaching and the BJP feared its voter base might shift.

The former UP minister cited incidents of violence in Hathras, Unnao, Lakhimpur Kheri and Gorakhpur to highlight the poor law and order in the state.

Asked to comment on being dubbed "selfish" by BJP leaders after he left their party and subsequently joined the SP, Maurya said, "This is an example of their narrow mindedness."

Taking a jibe at the Congress, he said, "Congress is fighting a battle for its existence in UP and all its leaders are in deep slumber like “Kumbhakaran” (mythical character).

Mr Maurya's daughter Sanghmitra Maurya is a BJP MP from Badaun in the state.