The demonstrations on Sunday are being perceived as a sign of dissidence that had been brewing within the party due to alleged lack of management by Biplab Deb-led BJP-IPFT alliance government. 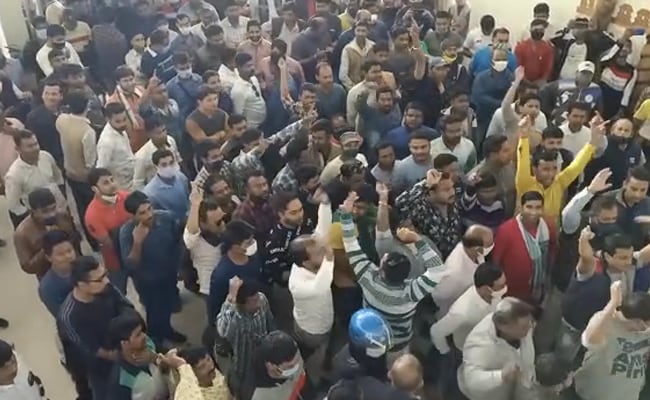 Amid "Biplab Hatao, BJP Bachao (Remove Biplab Deb, save BJP)" slogans being raised by a crowd on Sunday believed to be consisting of the ruling party's supporters, BJP's newly appointed national secretary and its central observer for Tripura Vinod Kumar Sonkar said there are "no differences" within the party.

A crowd of over hundred people had gathered in and around the state Guest House where Mr Sonkar was interacting with the party's leaders and MLAs and started raising the slogans "Biplab Hatao, BJP Bachao", perceived to be against Chief Minister Biplab Kumar Deb.

The demonstrations on Sunday are being perceived as a sign of dissidence that had been brewing within the party due to alleged lack of management by Biplab Deb-led BJP-IPFT alliance government.

There had been a stark discontent between the incumbent regime and MLA Sudip Dev Barman, a BJP heavyweight who was ousted from Health portfolio in June last year.

When Mr Sonkar, after completing his meetings came out, the crowd had obstructed him and did a demonstration for some time obstructing his vehicle.

Police had to intervene and managed to clear an exit and escorted Mr Sonkar's convoy to the party office.

Mr Sonkar, a two-time Lok Sabha member from Uttar Pradesh's Kaushambi who had arrived for the first time in Tripura on Saturday for a two-day state visit after being appointed as the party's central observer last month, held a series of meetings with Chief Minister Biplab Kumar Deb, state President Manik Saha and a host of MLAs and senior leaders and discussed various affairs of the party.

Mr Sonkar, before leaving for Delhi from Agartala on Sunday afternoon, said, "There are issues like cabinet expansion and organisational revamp. I have discussed every matter with the ministers, MLAs and party functionaries. The discussion would continue in future too to strengthen the party in Tripura and better coordination between the party and the government."

54-year-old Sudip Dev Barman, son of former Chief Minister and Congress leader Samir Ranjan Barman was the one who had led seven MLAs to join the BJP in June 2017 from the Trinamool Congress along with scores of party leaders and workers to BJP and was also considered instrumental in inking alliance with IPFT (Indigenous People's Front of Tripura).

According to local media speculations, a group of about 10 MLAs and several state leaders, allegedly, led by Mr Barman had visited Delhi in October to discuss issues with the central leadership.

Meanwhile, Sanjay Mishra, the Officer on Special Duty to Biplab Deb, reacted to this development and said: "We have identified many of them. They were CPM cadres. When the CPM's official social media page does a live on this, you can understand who were the people behind these slogans."