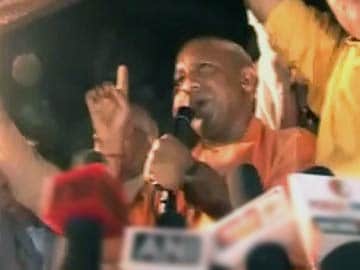 Yogi Adityanath at a rally in Lucknow despite being refused permission by local administration.

Lucknow: Yogi Adityanath, the BJP's controversial star campaigner in Uttar Pradesh, defied the state government  to hold a rally in Lucknow this evening.

Justifying his decision, Adityanath, 42, said, "For the betterment of Uttar Pradesh, we have to fight against the state government's dictatorship and undemocratic ways."

On Saturday, Uttar Pradesh votes for nine assembly seats and one parliamentary constituency.

The Lucknow Police have registered a First Information Report or FIR against Adityanath and other BJP leaders who attended the rally for violating section 144 and model code of conduct of the Election Commission.

Local officials, who have also filmed Adityanath's speech, claimed they had refused him permission because they were worried about a possible clash between workers from the BJP and the ruling Samajwadi Party, which was scheduled to hold its own rally nearby.

Adityanath was asked yesterday by the Election Commission to explain alleged hate remarks made recently to voters. (Read more...)

In the national election in May, the BJP won 71 of the 80 parliamentary seats in Uttar Pradesh.

Critics claim the outstanding result was accomplished by Amit Shah through a strategy pivoted on stirring communal tensions for electoral advantage. Mr Shah, a top aide of Prime Minister Narendra Modi and now the BJP president, has denied those charges.

In September, nearly 60 people were killed and 40,000 displaced after deadly Hindu-Muslim riots in Western Uttar Pradesh's Muzaffarnagar, just a four-hour drive from Delhi. Investigations found politicians across parties, including the BJP, had fuelled the violence with incendiary speeches.

A video that appeared recently online shows Adityanath making hate remarks against Muslims; he has suggested the video is doctored. (Also Read: No Place for Others in Areas with Over 40% Muslim Population, says Yogi Adityanath)

In his Independence Day speech, the Prime Minister called for an end to communal violence.

But ahead of the by-elections in Uttar Pradesh, local BJP leaders have been accused of trying to polarize voters by focusing in their campaign on forced conversions and "love jihad" - what they describe as an Islamist strategy to convert Hindu women through seduction, marriage and money.