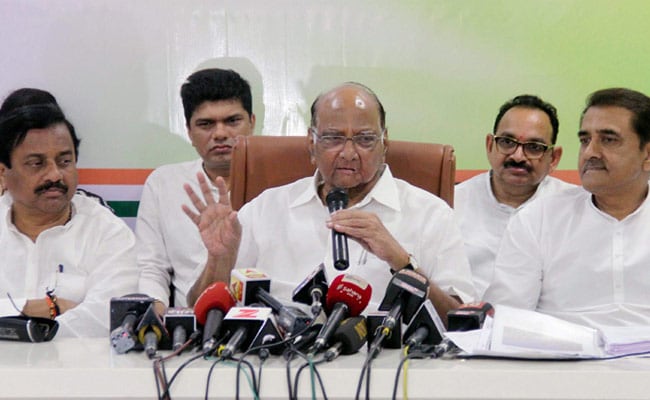 New Delhi: For the second time in as many weeks, NCP Chief Sharad Pawar has come out in support of Rahul Gandhi and hit out at the government saying the BJP is "scared" of the Congress vice-president and has resorted to "revenge politics". The veteran politician's statements come ahead of the Gujarat assembly polls, which his party will contest alongside the Congress party.

Mr Pawar accused the government of using state machinery for pursuing a vendetta against Congress leaders. "The old files which were shut at the time of Rajiv Gandhi's time are now again being opened and they are trying to smear the reputation of the family which has sacrificed immensely for the country," he said at a public meeting in Chandrapur situated in the Vidarbha region of Maharashtra.

"This indicates that the government is getting scared of Rahul Gandhi. Power is being misused," Mr Pawar said. "The government has forgotten that the people of our country won't tolerate revenge politics."

The NCP leader said that government came to power on the plank of development, but has instead pursued a vendetta against the Congress party. "Indira Gandhi's powers faded away after the emergency. In 1977, Morarji Desai became the Prime Minister and Chaudhary Charan Singh was the Home Minister.

People were hoping that the new government would work for growth and development of the country. But the government sent Indira Gandhi to Tihar Jail." Mr Pawar said. "The result of that was that just after six months Morarji's government fell and Indira Gandhi came back to power," he said.

Promoted
Listen to the latest songs, only on JioSaavn.com
"This clearly shows that the country does not like politics based on revenge but Modi government has forgotten this," Mr Pawar added.

Two weeks ago, Mr Pawar had praised Rahul Gandhi saying "people had begun to view him differently". Mr Pawar's statements come at a time when the there is speculation about shifting political alliances in Maharashtra that could also take concrete shape for the general elections in 2019. There has been talk of the Congress and NCP coming together along with a tacit understanding with BJP's unhappy ally - Shiv Sena which shares power with the BJP in the state and the centre.