As soon as Vijay Goel, armed with a placard saying "Odd-Even - A Political Stunt", returned home after his act of defiance, enter Delhi Transport Minister Kailash Gahlot with a bouquet of roses.

Vijay Goel was stopped by traffic cops for violating the "odd-even" scheme. (PTI)

BJP leader Vijay Goel, protesting the Arvind Kejriwal government's Odd-Even car scheme enforced from today in Delhi, drove out of his home in an odd-numbered SUV, painted bright orange with messages on it, as a mark of protest. Barely 100 metres from his home, the vehicle (2727), was stopped and the MP was fined Rs 4,000.

As soon as Vijay Goel, armed with a placard saying "Odd-Even - A Political Stunt", returned home after his act of defiance, enter Delhi Transport Minister Kailash Gahlot with a bouquet of roses. 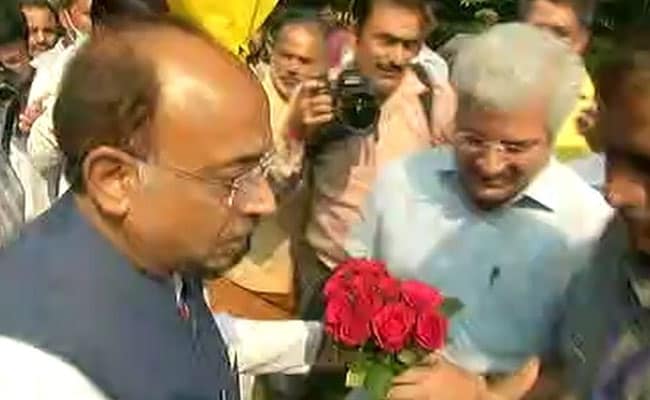 The minister, handing the roses, urged Mr Goel to support his government's anti-pollution measure by not defying the odd-even rule. Mr Goel also produced a bouquet.

With media cameras recording every second, the two rivals had a conversation that best showcased politics over how to combat deadly pollution in Delhi, where elections are due early next year.

"If only you had met not just me, but all seven MPs of Delhi before. My complaint is, for five years your government did nothing. If stubble burning by farmers in Punjab and Haryana are the problem (AAP's main complaint), then how will odd-even help," Mr Goel asked. 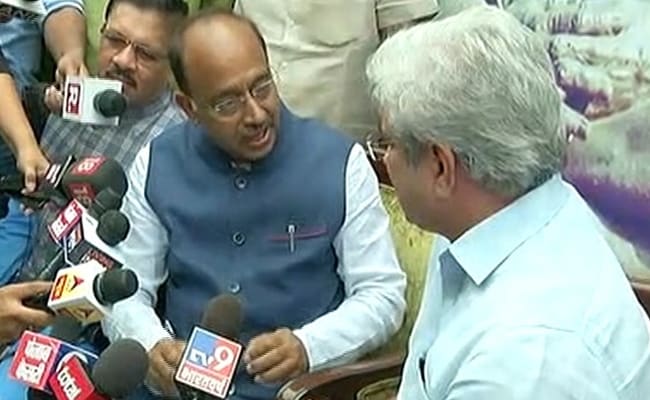 Mr Gahlot replied: "Even if 50 per cent vehicles are off the road, we can say pollution will be less."

"I welcome measures to fight pollution. But you exempted two-wheelers, Olas, Ubers, taxis. Only four-wheelers have to follow the rule. So I feel the odd-even is a naatak (sham)," Mr Goel said, mincing no words just moments after the exchange of flowers and greetings.

"If you really wanted to fight pollution, you should have done this earlier or you should have done it every year. Why just before elections," Mr Goel questioned, accusing the AAP minister of spending on anti-pollution ads when that money could have been used to help farmers remove stubble - a huge contributor of smog in the north.

Mr Gahlot replied: "We have to be together to fight this. If you don't cooperate, the people will not get the right message."

The BJP leader shot back: "My protest was symbolic. Your ad is misleading. You say odd-even has cleaned the air, not reduced pollution. Not a single initiative to check pollution is yours."

After this back-and-forth, the two finally shook hands, smiled, and went inside for tea.