Congress chief spokesperson Randeep Surjewala asked if it was justified that the police entered the Jamia University campus library and beat up students and lob tear gas shells at them. 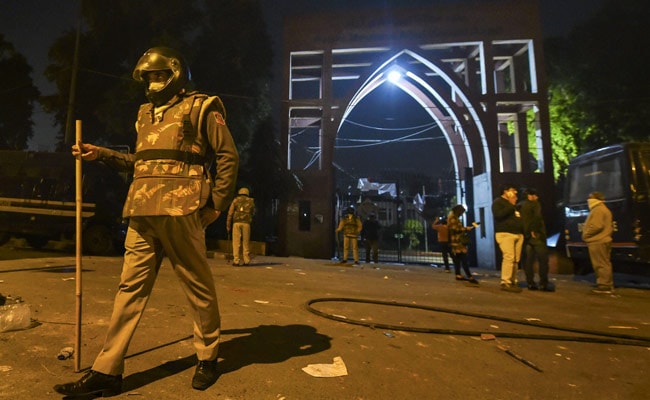 A protest march by Jamia students ended in a pitched battle with the police in Delhi today.

Blaming the Centre's BJP government for the police action in Jamia varsity campus, the Congress on Sunday accused it of having failed in its duty to maintain peace in the country and leaving even Delhi burning after Assam, Tripura and Meghalaya.

Even as the Congress attacked the BJP for police action in Jamia varsity, its senior leader KC Venugopal appealed for "restraint", while condemning the "brutal crackdown" on Jamia students.

"From the North East to Assam, West Bengal and now in Delhi. The BJP government has failed in its duty to maintain peace in the nation. They must take responsibility and restore peace in our country," the Congress said on its official Twitter handle.

Congress chief spokesperson Randeep Surjewala asked if it was justified that the police entered the Jamia University campus library and beat up students and lob tear gas shells at them.

"Delhi is burning, Assam, Tripura, Meghalaya are burning. Violence is spreading in Bengal, the Home Minister does not have the courage to go the northeast, Japan PM's visit had to be cancelled, but Modiji is happy doing poll campaign in Jharkhand.

"Those who oppose it are dubbed as traitors and Jamia is the recent example of this," he said.

"Is it justified that the BJP Government enters the library and hostel at Jamia University and throw tear gas and beat up the youth. Can students not protest against the CAB2019 which is a blow on the soul of the Constitution," Mr Surjewala asked.

The police had to enter the Jamia university after violent protests erupted in the campus and later some government and private property was also vandalised around the Jamia and New Friends colony area around it.

"I strongly condemn the brutal crackdown on the innocent students of Jamia by Delhi Police. I appeal everyone to maintain restraint & peace," said KC Venugopal in a tweet.

He also appealed to Union Home Ministry and Delhi Chief Minister Kejriwal to intervene into the situation and "resolve the crisis".

"Arvind Kejriwal and MHA must intervene to resolve the crisis in Jamia in a cordial manner," he added.