BJP Delegation From Gujarat Has Come To Learn From "Delhi Model", Says AAP

AAP MLA Sanjeev Jha said, a delegation from the Aam Aadmi Party will visit Gujarat next week from Delhi to see the government-run schools, hospitals. 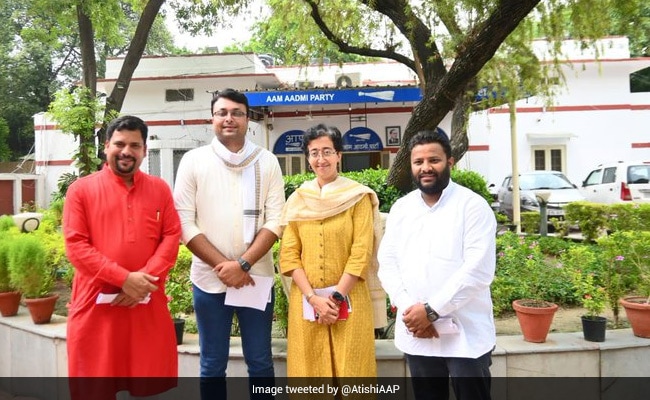 A delegation of the Gujarat BJP arrived in Delhi on Tuesday to look into what it called the "fake" Delhi model of governance, with the AAP claiming that they had come to learn how people there can also be provided with good schools and hospitals.

Addressing a joint press conference, Aam Aadmi Party (AAP) MLAs Atishi and Sanjeev Jha welcomed the Gujarat BJP delegation and extended an open invitation to them to visit the party headquarters, promising that they will take the delegation members to any of the Delhi government schools, mohalla clinics and hospital that they wished to see.

Mr Jha said that a delegation of the AAP will visit Gujarat next week from Delhi to see the state government-run schools and hospitals there, and urged the state unit of the BJP to host the delegation in the same manner.

A Delhi BJP leader had said on Monday, "The Gujarat BJP delegation, during its two-day visit, will see how a false and publicity-based Delhi Model is being propagated by Kejriwal ahead of the elections in Gujarat." The BJP delegation's visit to the national capital comes in the run-up to the assembly polls in Gujarat later this.

Buoyed by its stupendous victory in the Punjab assembly polls earlier this year, the AAP is gearing up to contest all assembly seats in Gujarat in the upcoming elections, projecting itself as an alternative to both the ruling BJP and the Congress in the state and highlighting Arvind Kejrwal's Delhi model of governance.

"We welcome the Gujarat BJP delegation on the behalf of the Aam Aadmi Party and Arvind Kejriwal government. The Delhi chief minister has asked some of us (MLAs) to welcome the delegation," Atishi told the press conference.

"We want to tell the Gujarat BJP delegation through media that we are here in the party office. You come here and tell us which school, mohalla clinic, hospital you want to see. We will definitely take you there. We are happy that you have come," she added.

The Kalkaji MLA claimed that the government schools in Gujarat are in a very bad shape.

"While more than 6,000 schools in Gujarat have been closed in last two years, the government schools in the state are short of more than 19,000 classrooms as per data presented by the state education minister in the assembly, " she said.

At the press conference, she also showed some pictures, saying, "we can see in these sample pictures the condition of schools in Gujarat -- walls broken, toilets are dirty." These are "some of the pictures" which are also available in public domain, she added.

She said the "revolution" brought in the education sector in Delhi by the Arvind Kejriwal government is today being discussed all over the world.

"I hope and appeal that we will also be hosted in the same manner when we visit Gujarat...give us the names of the schools and hospitals that we can visit in Gujarat and show them to us," he said.

"It's good that education and health are becoming an issue and a subject of debate. This will take the country on the path of progress," he added.