Birthday Gift For This 6-Year-Old, A Thank You Note From PM Modi 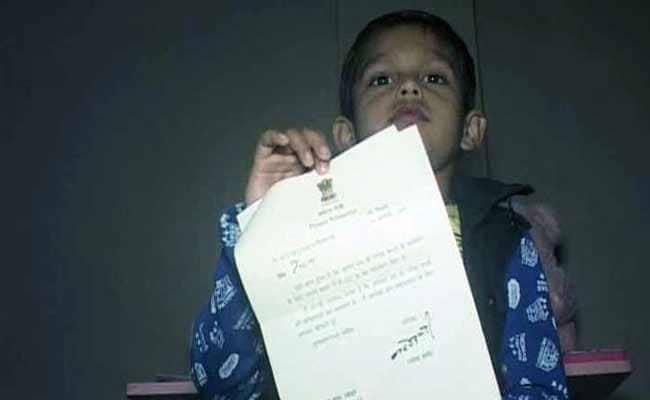 Bhavya now wants to save more money to contribute to the PM's fund.

The little boy, who celebrated his birthday on January 25, decided to celebrate his birthday by breaking his piggy bank and contribute all his savings of Rs 107 to the Prime Minister Relief Fund.

Bhavya, who received the letter on March 7, says every day on his way to the school he would see poor children and wanted to do something for them. "So with my grandfather's help I wrote a letter to Modi uncle and also contributed Rs 107 for the welfare of the poor children. I am very happy that Modi uncle acknowledged my contribution and thanked me through this letter," says a beaming Bhavya.

Prime Minister Narendra Modi, who had personally signed the letter, thanked Bhavya for his generosity and for being concerned about the poor children of the country.

Bhavya's grandfather Sunil Aawte told NDTV that he is very proud that his grandson has been appreciated by the Prime Minister.

Promoted
Listen to the latest songs, only on JioSaavn.com
"Bhavya has a constant habit of asking questions. On his way to school he would often ask me why poor children did not go to school. I would tell him that they did not have money. This encouraged him to save money for them and I helped him send the money to the Prime Minister."

Bhavya, who studies in Upper Kinder Garden, now wants to save more money and contribute more to the Prime Minister's Fund next year.