A Plane That Runs On Fuel Made by 500 Families, A First In India

SpiceJet's biofuel-driven flight comes at a time when spiralling aviation fuel has strained the finances of domestic airlines.

The use of biofuels will drastically reduce the cost of airline operations.

India's first biofuel-powered flight that aims to reduce costs of air travel by replacing the costly aviation turbine fuel was successfully tested today. A 72-seater SpiceJet aircraft, partially powered by biojet fuel, took off from Dehradun and landed at the Delhi airport.

The biofuel is made partially from renewable resources such as agricultural residues, non-edible oils and bio-degradable fractions of industrial and municipal wastes, SpiceJet said. Biofuel flights could make air travel cleaner and more efficient, thus drastically reducing the cost of airline operations by reducing the dependency on aviation turbine fuel.

The biofuel for today's trial flight, developed by Dehradun-based CSIR-Indian Institute of Petroleum, was rigorously tested to ensure flight safety.

NDTV was onboard the SpiceJet Bombardier Q400 turboprop aircraft that was flagged off by Uttarakhand Chief Minister Trivendra Singh Rawat from Dehradun's Jolly Grant airport. Around 20 people, including officials from aviation regulator DGCA and SpiceJet, were in the test flight. The duration of the flight was around 25 minutes, according to an airline executive. 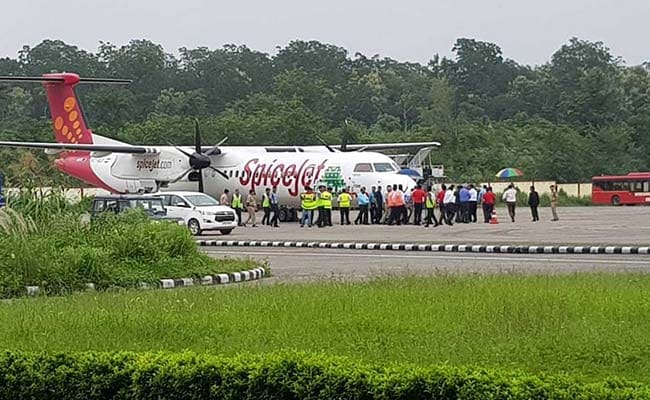 SpiceJet's biofuel is a mix of the oil extracted from the seeds of Jatropha plant and aviation turbine fuel.

SpiceJet's biofuel is a mix of the oil extracted from the seeds of Jatropha plant and aviation turbine fuel, the airline said. Five hundred farmer families in Chhattisgarh are involved in the production of the partially-refined biofuel used in today's flight.

The biofuel-driven flight comes at a time when spiralling aviation fuel price has strained the finances of domestic airlines. The government will make an environment friendly aviation action plan till 2035, Civil Aviation Minister Suresh Prabhu said. "We want to increase the use of biofuel in the country so that there is reduction in green house gas emission and import of petroleum. We will make sure that more and more airlines start the use of biofuel," Mr Prabhu said.

While twenty five per cent of the right engine of the aircraft will have the biofuel mix, the left engine will run on aviation turbine fuel. The efficiency of the engine running on biofuel is expected to be slightly higher than that of the other engine.

"It has the potential to reduce our dependence on traditional aviation fuel by up to 50 per cent on every flight and bring down fares," SpiceJet Chairman and Managing Director Ajay Singh.

If today's test brings success, India could join a select few countries such as USA and Australia who have had biofuel-operated commercial aircraft.

(With inputs from PTI, ANI and IANS)