Bina 1 and 2, sisters and tigresses, arrive in Sariska 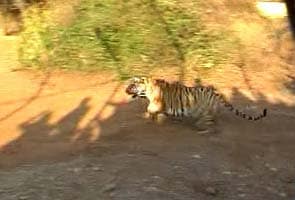 Sariska, Rajasthan: Efforts to relocate tigers from Ranthambore to Sariska received a big boost today as, in two days, two young tigresses, Bina 1 and Bina 2, were successfully tranquilised and moved to the national park, located in Alwar in Rajasthan.

There is more good news. After a four-year-long wait, Sariska is expecting another litter. Tigress STF 5 is likely to deliver soon. Thrilled with the news and the baby boom, Forest Minister Bina Kak told NDTV that she is thrilled as "happy days are here again," but she also added that it is "challenging to have so many and keep them safe."

After all the tigers in Sariska were wiped out in 2004-2005, allegedly by poacher Sansar Chand and his gang, the national park had become a flashpoint for the conservation crisis gripping the country, but slowly the relocation of tigers from Ranthambore to Sariska have turned that story around. Sariska is the first place, anywhere in the world, where tigers have been successfully relocated to. The first tiger to be moved from Ranthambore to Sariska was flown in an Indian Air Force helicopter from Ranthambore on June 28, 2008.

As relocation efforts continued, two males and three tigresses were the first few to be introduced to Sariska.

One of these males was poisoned in 2011. With the new incumbents, the number of tigers, male and female, in Sariska goes up to nine.

Bina 1 and Bina 2, the latest entrants to Sariska, have an interesting story of their own. Forest Minister Bina Kak, herself an avid photographer, once while taking pictures in Ranthambore in 2011, clicked a tigress with an uncomfortable squat. When she asked the vets to examine her, it was found the Tigress (T 5) had maggots, and despite best efforts to save her, she died leaving behind two young cubs.

Wildlife officials were worried that the motherless cubs would be killed by a male tiger, as usually happens to orphans in the wild. But surprisingly, officials discovered some unusual photographs in the camera trap which made them sit up and take notice. They found these two young cubs in the company of a male tiger. After some videos were taken, wildlife enthusiasts came across some unusual tiger behaviour - the male was actually taking care of the cubs. Suspected to be their father, it appeared he was also hunting and providing for the young cubs. While this behaviour by the male tiger is unusual, it is, as far as tiger history goes, the first documented case of cubs being cared for by a tiger believed to be their father.

Promoted
Listen to the latest songs, only on JioSaavn.com
Since minister Bina Kak had taken great pains to save the young females' mother, wildlife enthusiast named the young cubs Bina 1 and Bina 2, as a tribute to the minister.

Now, as Bina 1 and Bina 2 find a new home in Sariska, their translocation has been overseen by none other than Ms Kak, who by a strange twist of fate found the lives of these little orphans linked to hers.