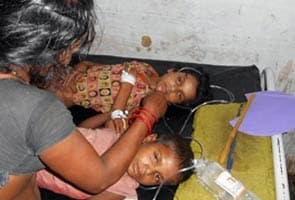 Patna: Soon after they served the daily free lunch they had prepared for dozens of children at a school in Masrakh, the two cooks realized something was very wrong.

The students started fainting. Within hours, they began dying.

By Thursday afternoon, 23 children between the ages of 5 and 12 had died from eating food laced with insecticide and many others had fallen ill in this part of Bihar, 50 miles north of Patna.

Authorities discovered a container of pesticide in the school's cooking area next to the vegetable cooking oil and mustard oil, but it isn't yet known if that container was the source, according to Amarjeet Sinha, a top official in the state of Bihar, where the tragedy took place.

The police is searching for the principal, who fled after the students started falling sick. The groceries for the meal were allegedly bought from a store owned by her husband.

The cooks, Manju Devi and Pano Devi, told The Associated Press that the principal controlled the food for the free daily lunch provided by the government at the school.

On Tuesday morning, she gave them rice, potatoes, soya and other ingredients needed to prepare the meal and then went about her business. As the children ate, they started vomiting and fainting, the cooks said.

Manju Devi, 30, ate some of the food and fainted. Her three children, ages 5, 8 and 13, fell ill as well. All were in stable condition today.

While Pano Devi, 35, didn't eat the tainted food, her three children did. Two of them died and the third, a 4-year-old daughter, is in hospital.

"I will stop cooking at the school," she said. "I am so horrified that I wouldn't grieve more if my only surviving child died."

Amarjeet Sinha, a state official, said that one of the cooks has told authorities that the cooking oil appeared different than usual, but the principal told her to use it anyway. Doctors believed the food contained an organophosphate used as an insecticide, he said.
Comments
Bihar mid-day meals