Bihar Elections: At a campaign rally, Tejashwi Yadav also accused the Nitish Kumar government of failing to eliminate corruption, create jobs and stop migration of workers to other states. 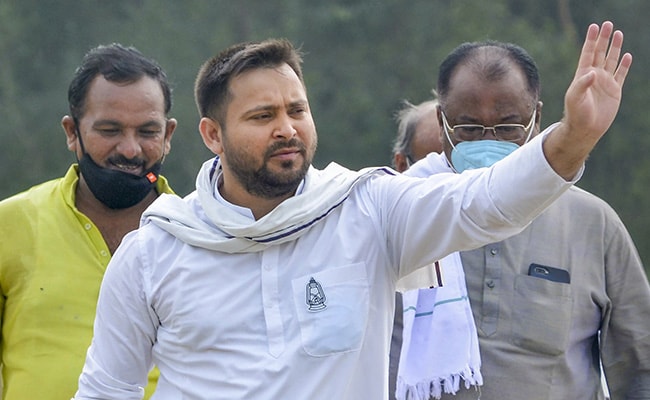 Bihar politician Lalu Yadav will come out of jail on November 9 and a day later, Chief Minister Nitish Kumar will have his farewell, Rashtriya Janata Dal leader Tejashwi Yadav said on Friday, promising a victory for the opposition front he is leading in the assembly elections that start next week.

Tejashwi Yadav's father Lalu Yadav is in judicial custody in Jharkhand in a corruption scandal. He was recently granted bail by the Jharkhand High Court in one of the linked cases but could not come out of jail as his bail plea in another case was being heard.

"Lalu ji is getting released on November 9. He has got one bail and will secure another on November 9, which also happens to be my birthday. The next day, Nitishji will have his farewell," Tejashwi Yadav said at an election rally with Congress leader Rahul Gandhi in Bihar's Hisua.

The state is going to vote on October 28, November 3 and November 7, and the results will be announced on November 10.

In his address, Mr Yadav accused the Nitish Kumar government of failing to eliminate corruption, create jobs and stop migration of workers to other states.

"Nitishji, you are tired. You won't be able to take care of Bihar," the 30-year-old leader charged at Mr Kumar, who is 69.

Taking shots at the chief minister for saying that Bihar missed the industrialisation boom because it is landlocked, the Rashtriya Janata Dal (RJD) leader repeated his promise of creating 10 lakh government jobs in his first cabinet meeting if the "Grand Alliance" - which also includes the Congress and Left parties - comes to power.

"Those who did not give you jobs, education, health facilities and industries in 15 years will not do so in the next five years either," he said.

In an address, delivered mostly in Bhojpuri resembling his father's famous style, Tejashwi Yadav also attacked Prime Minister Narendra Modi, who held his first rallies in Bihar for these elections on Friday.

"The PM has come to Bihar. I was expecting him to tell when Bihar will get the special state status and a special package," he said.