Bihar Election Dates: Chief Election Commissioner Sunil Arora called it a "leap of faith", pointing out that medical and engineering exams JEE and NEET took place recently and a large number of students sat for them.

Bihar will vote on October 28, November 3 and 7 for a new government and the results will be announced on November 10, the Election Commission said today. The country's biggest election in the coronavirus crisis will be held with many changes, including an extra voting hour and no physical contact during the campaign.

Announcing the three-phase election, Chief Election Commissioner Sunil Arora called it a "leap of faith", pointing out that medical and engineering exams JEE and NEET took place recently and a large number of students sat for them. "COVID doesn't show any sign of going down. Some way had to be found to choose representatives and protect the health of people. Life has to go on," he told reporters.

"The world has changed significantly since the last elections, which were held for the Delhi assembly. The COVID-19 pandemic has forced a new normal in every aspect of our life," Mr Arora said.

Bihar has to elect a new 243-member assembly by November 29.

Voting will take place from 7 AM to 6 PM instead of 5 AM. Covid patients, suspects and those in quarantine will vote separately and there will be no physical contact during meetings and rallies, said the Chief Election Commissioner. Voters have to use masks and gloves. The number of phases have also been reduced from five to minimize infection. "COVID-19 patients can vote in the last hour of the day," Mr Arora said. 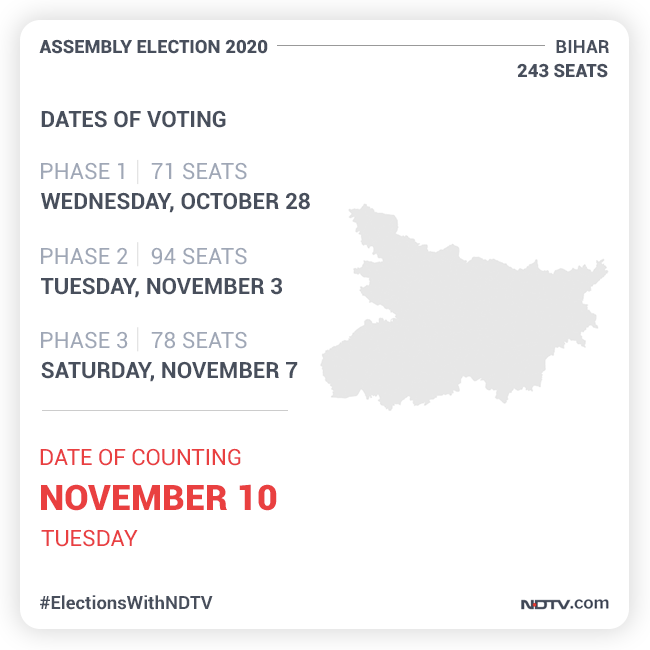 This is the country's biggest election to be held in the middle of the coronavirus crisis.

The powerful election body has also warned against the misuse of social media. "Anyone using social media for mischievous purposes such as for flaring communal tension during elections will have to face consequences; hate speech will be also dealt with harshly," said Mr Arora.

Chief Minister Nitish Kumar, who heads a coalition in the state with the BJP, hopes to win a fourth term with the opposition RJD of jailed former chief minister Lalu Yadav and the Congress - his partners in the last election - challenging him.

The opposition, led by Lalu Yadav's son Tejashwi Yadav, plans to target the ruling coalition over its handling of the coronavirus crisis and the migrant crisis, besides the floods in the state. The centre's controversial farm bills, passed in parliament despite opposition protests, have also armed Tejashwi Yadav with a campaign pitch to target what he calls an "anti-farmer" government. This morning, he drove a tractor at a protest to drive home the point.

Another subject that has been dragged into Bihar politics is the death of Sushant Singh Rajput, a promising young Bollywood star who was from Bihar. The Nitish Kumar government - including the BJP - claims credit for pushing the investigation towards the CBI, which they say will ensure justice for a "beloved son of Bihar".

Last year, in the national election, the Nitish Kumar-BJP-Paswan combo won 39 of 40 parliamentary seats in Bihar, demolishing the Tejashwi Yadav-led opposition and scoring a morale-booster before the state poll.