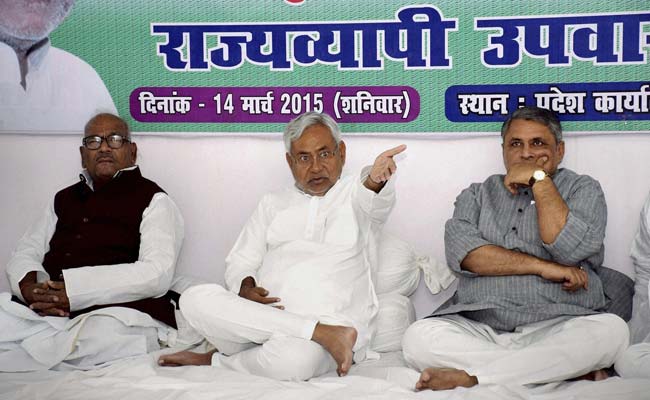 Bihar Chief Minister Nitish Kumar today observed a 24-hour protest fast against Centre's Land Acquisition Bill, which he said despite changes was "anti-farmer" and "pro-corporate" and demanded its immediate withdrawal.

"On the basis of majority, BJP is trying to enforce the Land Acquisition Bill which will not be tolerated and a country-wide agitation would be launched by JD(U) with parties opposed to it," Mr Kumar told reporters at the fast venue at the party office.

Describing the Bill as "Black Law", he questioned the motive of Modi government in bringing a new legislation when a "progressive" one on acquiring land was enacted in 2013 on the basis of consensus of all parties, including the BJP.

Hitting out at his bete noire Prime Minister Narendra Modi, he said, "by rushing through the new Land Acquisition law, he is paying back corporate houses that supported him in Parliamentary election."

"BJP missed no chance of taking credit for the 2013 Land Acquisition Legislation in which it also had a role. What happened within one year that the BJP-led NDA government is bringing in a new law which has taken out the heart of the 2013 law?," Mr Kumar asked.

"The present Land Acquisition Bill seems to have taken heart out of the 2013 Legislation and rendered it like a 'dead body'," he said, adding Bihar will not implement it even if BJP manages to get the Parliament's nod for it.

Unlike the 2013 legislation, the new one has done away with the clause that made it mandatory to take the consent of 80 per cent of farmers for acquiring land, social impact analysis of the land acquisition and return of the land if the project failed to take off in five years.

"In a way the present Land Bill is akin to 1894 Land law during British rule in which the government was absolute owner of the land. The 2013 Land law had made significant changes in 1894 law to make it favourable for farmers but the present legislation has again returned it to that time (1894)," he said.

Mr Kumar, who was accompanied by senior party leaders and state ministers, did his morning yoga at the JD(U) office. He will stay there at night as part of his protest programme. The fast would end before sunrise tomorrow.

Similar protest fasts are being observed by JD(U) MPs, MLAs and party leaders across Bihar.

Hitting out at the Modi government, Kumar said the new Land Acquisition Law is an attack on farmers' right to livelihood.

"During election, he (Modi) promised farmers to pay them handsome bonus. But after winning their votes, he has betrayed them by bringing the land bill which is in the interest of corporate houses," he said.

Mr Kumar said in 2006, farmers' land was taken for constructing special economic zones. Many of the SEZs failed to take up, while on some other parcels of land the purpose for which they were taken from farmers were changed, he alleged, adding Bihar had decided against setting up SEZs.

Rejecting BJP's argument that the new law would provide handsome compensation to farmers against their land, the Bihar Chief Minister said "It is a 'dhokha' (cheating) against them (farmers)."

In the absence of the social impact survey only a handful of farmers would get compensation, while others living in the area who would be affected would not get anything, he said.

Claiming that BJP has been isolated on the Land Bill and its long time associate Shiv Sena did not vote in favour of it in the Lok Sabha, Mr Kumar extended support to Gandhian Anna Hazare's three month-long padyatra against the Bill.

"Read the writing on the wall (protest of Land bill)," he said.

Promoted
Listen to the latest songs, only on JioSaavn.com
Earlier, Bihar JD(U) President Basistha Narayan Singh said the satyagraha by Kumar and other leaders of the party is aimed at stirring the heart of the people sitting in power at the Centre "who are out to take away the living of almost three-fourth population of the country for whom agriculture is the source of livelihood."

He told reporters that more than 60,000 JD(U) leaders and workers participated in the protest fast against land bill across Bihar and vowed to intensify the agitation in the days to come.