Keeping a smile on his face, the Bihar Chief Minister continued walking towards his car and left the Legislative Assembly 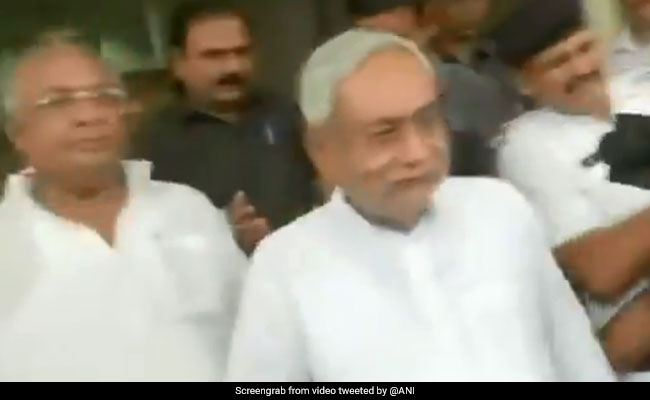 Mr Kumar was accompanying Union Minister and chief of Lok Janashakti Party (LJP) Ram Vilas Paswan who had come to the Bihar Legislative Assembly to file his nomination for Rajya Sabha as an NDA candidate.

Keeping a smile on his face, the Bihar Chief Minister continued walking towards his car and left the Legislative Assembly, while the reporters implored him to speak up on the havoc caused by encephalitis in the state.

#WATCH Bihar: Chief Minister Nitish Kumar evades questions of journalists as they ask him about the deaths of children in the state due to Acute Encephalitis Syndrome (AES). pic.twitter.com/37cQrlOskB

He also did not respond to the question of whether he will be visiting Muzzafarpur, which has been the worst affected by the outbreak of the disease, again.

Encephalitis so far has claimed the lives of 122 children in Bihar.

However, this is not the first time that the Bihar Chief Minister has refused to respond to questions on the topic. He also evaded reporters on June 19, after coming out of the All-party meeting called by Prime Minister Narendra Modi in New Delhi.

As per the data, a total of 101 deaths were reported at government-run Sri Krishna Medical College and Hospital while 20 children died at Kejriwal hospital in the district due to the vector-borne disease today.

Following the public outcry over lack of facilities in the government-run Shri Krishna Medical College and Hospital (SKMCH), the hospital management has converted a prisoners'' ward into an Intensive Care Unit (ICU) to accommodate the rising number of encephalitis patients.

The decision came after Kumar passed instructions to convert the prisoners'' ward into ICU for children to meet the acute crisis of beds.

Mr Kumar had earlier visited SKMCH to take stock of the situation. He had also announced an ex- gratia compensation of Rs 4 lakh each to the families of the children who died due to AES.