Bihar Assembly Elections 2020: Tejashwi Yadav said he is open to probes by agencies into his financial assets. 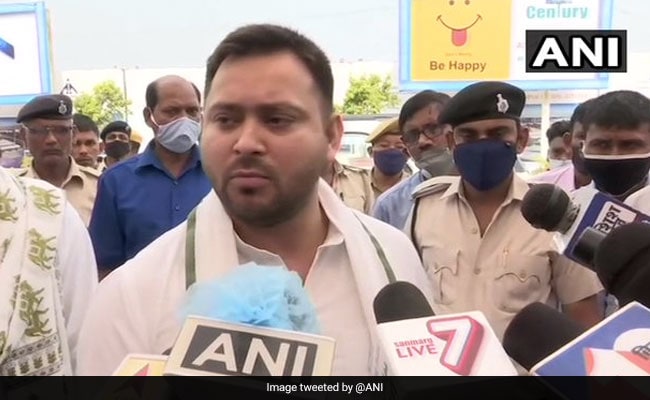 "Bihar Chief Minister Nitish Kumar is tired and can not handle the state. He does not want to talk about development, unemployment, education, health infrastructure and poverty. He says Bihar is a landlocked state, hence industries can not be set up resulting in no job creation," Mr Yadav, the opposition's chief ministerial candidate said.

The 31-year-old's comments came in response to Mr Nitish Kumar's views about the state's economy expressed a few days ago. "We wanted big-ticket investments, but the landlocked status of the state has acted as a roadblock," the Chief Minister had said on Tuesday, kicking off his party's virtual campaign for the assembly polls that begin on October 28.

A day after filing his nomination from the Raghopur seat, Tejashwi Yadav, a former Deputy Chief Minister, also responded to sharp comments about his financial assets, saying he is open to further probe by agencies besides the ones already investigating him.

In his nomination papers, Mr Yadav had disclosed Rs 5.8 crore in assets, prompting questions from Deputy Chief Minister and senior BJP leader, Sushil Kumar Modi, about the source of his income.

"How did he earn so much wealth without a job?" Mr Modi had asked on Thursday.

Tejashwi Yadav today said these barbs were meant to divert attention from the actual issues of unemployment and the poor condition of the migrant labourers who have returned to Bihar.

"NDA leaders are making it an issue that how 31-year-old Tejashwi has more than 50 properties when he doesn't belong to any maharaja family," he said.